With its gleaming, velvety blue-&-black feathers, the male Superb Fairy-wren is clearly distinguished. These ‘coloured’ males are often followed by a band of brown ‘jenny wrens’, usually considered a harem of females.

Still, a proportion of them are males who have not yet achieved their breeding plumage. The contents of these birds’ unkept nests — a clutch of three or four eggs — are not inevitably the descendants of the ‘coloured’ male, as there is much infidelity among female fairy-wrens with a lot of the eggs resulting from extra-pair liaisons.

Adult male Superb Fairy-wrens are amongst the most brightly coloured of the varieties, particularly during the breeding season. They have rich blue & black feathers above & on the throat. The belly is grey-white, & the bill is black.

Females & young birds are often brown above with a dull red-orange area encompassing the eye & a brown bill. Females have a pale greenish shimmer, absent in young birds, on the otherwise brown tail. The legs are brown in either sex. Males from further inland & southwest hold more blue on the back & underparts.

The fairy-wren call is a high pitched assortment and fast-paced whistles.

Several other varieties of fairy-wren are found in Australia. The males of each kind are quite distinct, but the females & young birds are frequently difficult to separate. Of the varieties that overlap in range with the Superb Fairy-wren, the female White-winged Fairy-wren Malurus leucopterus & the Red-backed Fairy-wren M. melanocephalus lacks the chestnut colour encompassing the eye.

Where are fairy-wrens found?

Superb Fairy-wrens are located south of the Tropic of Capricorn through eastern Australia & Tasmania to the south-eastern area of South Australia.

Seen in most habitat types where the fitting dense cover & low shrubs occur. These beautiful birds are prevalent in urban parks & gardens & can be seen in small social gatherings. These groups regularly consist of one male & several females & young birds.

Superb Fairy-wrens dine on insects & other tiny arthropods. These are caught regularly on the ground, but may also be obtained from low bushes. Feeding takes place in small social groups.

The nest is a dome-shaped construction of grasses & other delicate material. It is usually arranged in a low bush & is built by the female. The female incubates the eggs solely, but both sexes nurture the young. Other members of the group will also assist with the feeding of the young.

Fairy-wrens are amongst the most beautiful birds in Australia, (some) with their electric blue plumage, although they have quirky personalities.

Here, you can get to identify all 10 species of Fairy Wren. 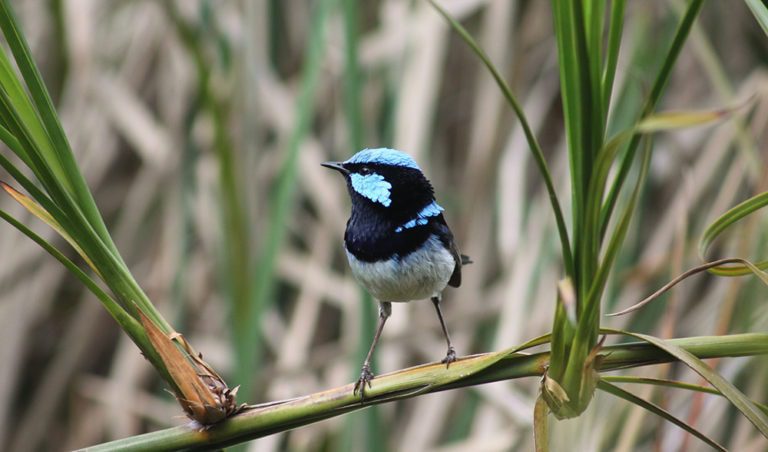 The superb fairy-wren is much loved amongst Australians, recognisable by their sky blue-coloured caps, which become iridescent throughout the breeding season.

This fairy-wren can be found over south-east Australia & enjoys a shrubby understorey wherever they move about in small groups. New research has shown that male fairy-wrens sing to their eggs & their chicks come out understanding their parent’s unique song. 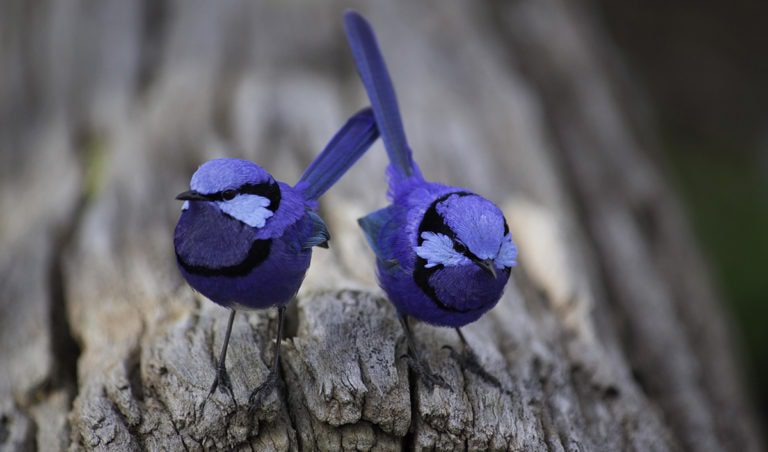 Splendid fairy-wrens remain arguably the most beautiful species of fairy-wren. Besides some brown feathers on their wings & their white stomachs, they are almost wholly electric blue.

They can be located in nearly every state & territory, excluding Tasmania. Curiously, to attract females, males sing their sexual performance songs when predators are nearby to display bravado and courage. 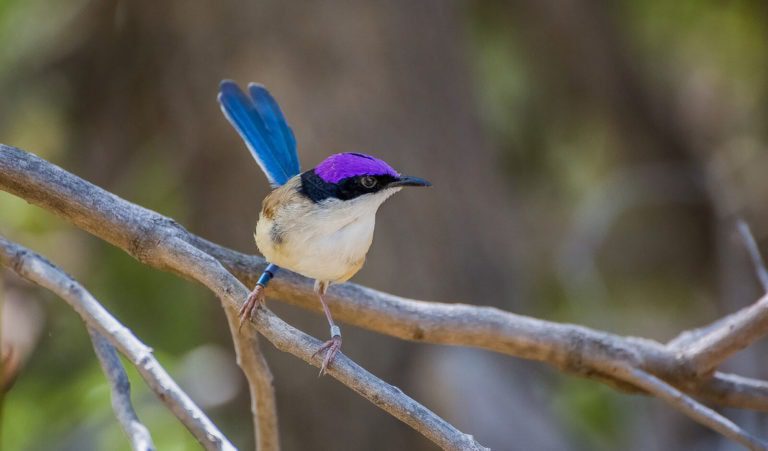 This fairy-wren has a striking purple crest, making it spectacularly unique from every other kind of fairy-wren. There are two subspecies of the purple-crowned fairy-wren, 1 that lives in the Kimberley region of Western Australia & the other in the Victoria River Region of the Northern Territory. Both live in strips of vegetation along streams & creeks.

The purple-crowns choose only one mate, which they stay close to for most of their lifespans, while other fairy-wrens are recognised for their promiscuity. 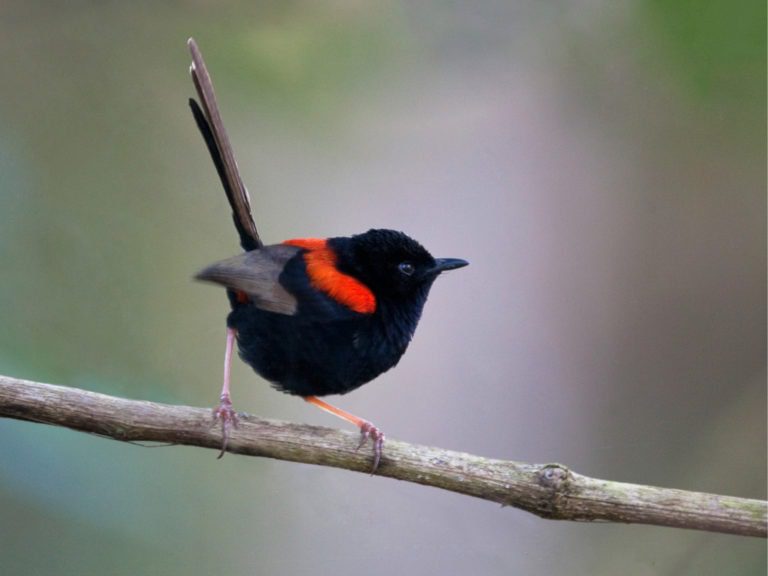 Similar to the purple-crowned fairy-wren, the red-backed fairy-wren is strikingly varied in colour from other fairy-wrens. During the mating season, males have a bright, crimson-red back, brown wings & black tail feathers, they are the only fairy-wren with absolutely no blue plumage. 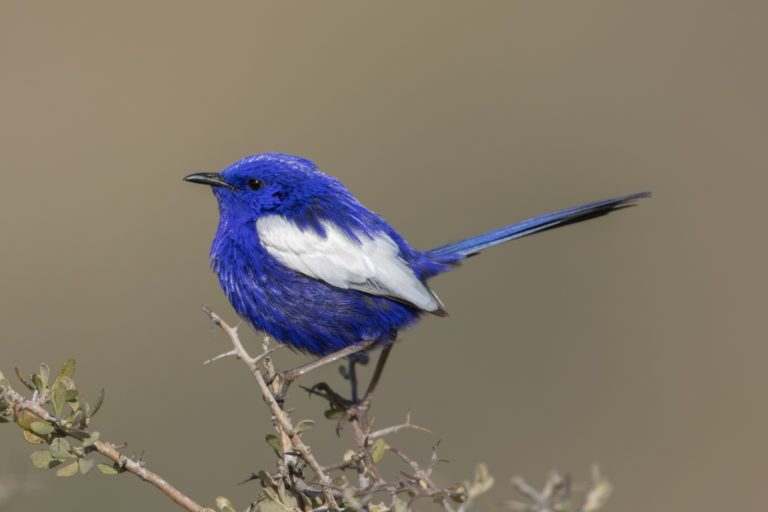 The white-winged fairy-wren, comparable to the splendid fairy-wren, has brilliant blue colouring, & white wings. They can be found overall Australian states & territories, except for Tasmania.

One subspecies found on Dirk Hartog Island, rather than bright blue, is black among white wings. 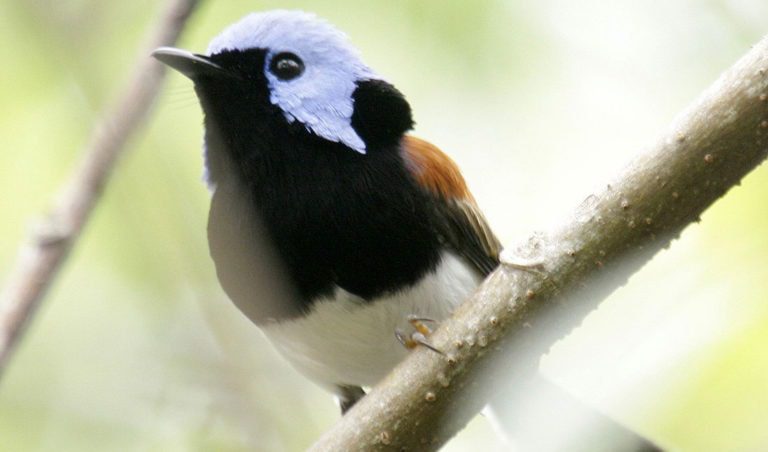 It’s indigenous to north-eastern Queensland & is recognised as the most arboreal (living in trees) kinds of fairy-wren. However, it never travels too far into the rainforest, favouring the shrubby areas on the outskirts. 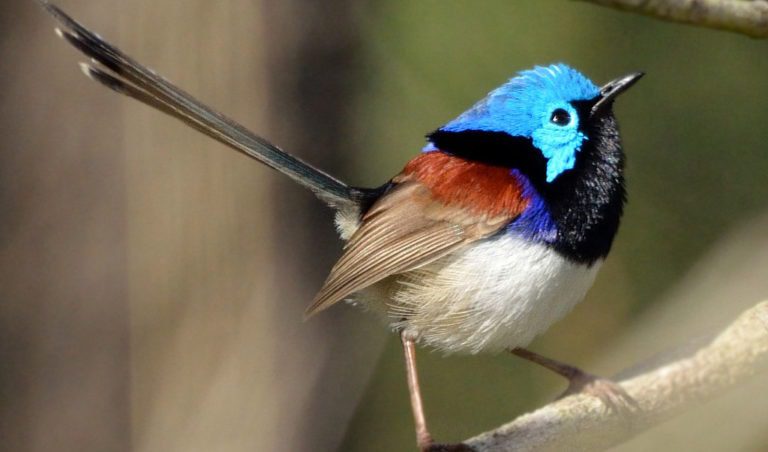 This fairy-wren has a relatively long blue tail. Otherwise, it is difficult to distinguish from the splendid & lovely fairy-wren. It can be found across all Australian regions, states & territories, excluding Tasmania.

Rather than living amongst grasses, this fairy-wren is thought to be quite shy, preferring the thickets of shrubs that provide more camouflage. They also don’t travel too far or for too long outside this environment. Adding to their shy behaviour, they’re also known to be less musical than other fairy-wrens.

Malurus assimilis
In 2018, the purple-backed fairy-wren was finally listed a new species, after being incorrectly titled a variegated fairy-wren before the new discovery (they look very similar). You can read about the news here. 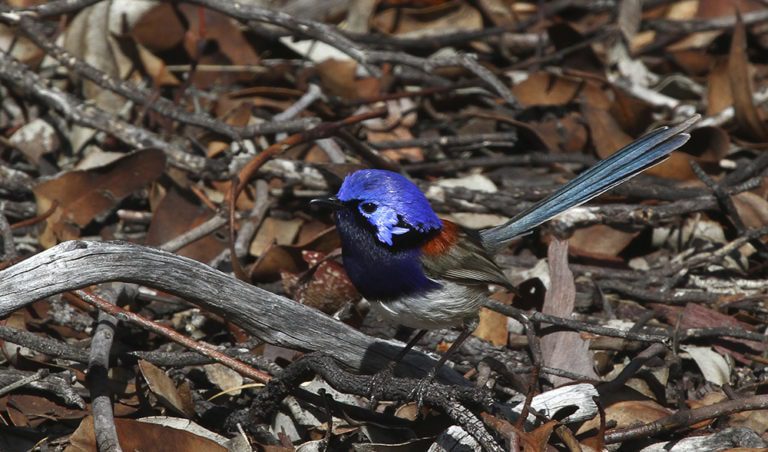 Located in Australia’s southwest, the blue-breasted fairy-wren was a favourite of the famous ornithologist John Gould who gave it the Latin title Malurus pulcherrimus, ‘pulcherrimus’ meaning “very pretty”. 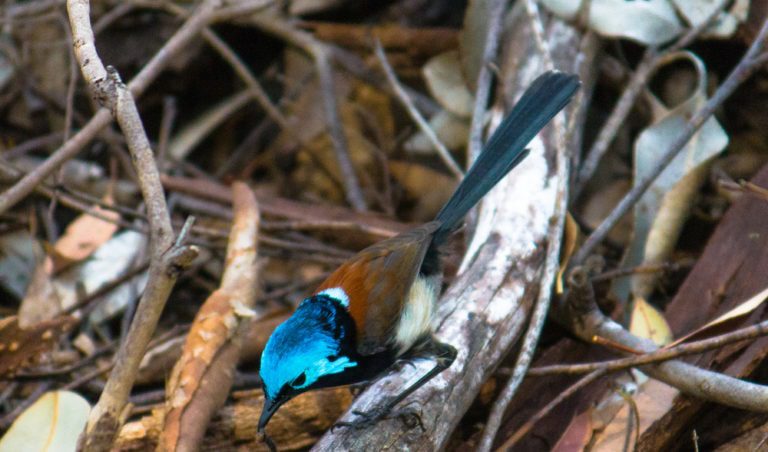 The red-winged fairy-wren is known for having the lightest blue helmet, & deep chestnut-coloured wings. It’s also recognised as possessing the most elongated tail out of the chestnut-winged fairy-wrens, adding to its recognisability.

It’s bound to small patches found in the south of Western Australia, where they favour to live in karri forests. Here, they are identified for being the only fairy-wrens with all-black bills.

Are fairy-wrens native to Australia?

The tiny, superb fairy-wren is endemic to eastern Australia, extending in habitat from south Queensland to South Australia’s Adelaide region, as well as throughout Tasmania. Males are easily differentiated from females by their distinctive colourings: mostly blue, with a black band across their back & head.

How do you attract fairy wrens?

Croweas, tea trees & dwarf flowering gums are some great insect-attracting shrubs for fairy-wrens. A birdbath located near dense bushes will also entice these pretty birds into the backyard or garden. They like the bath to be near bushes, so they have someplace safe to quickly fly to if they detect a predator.

Do fairy-wrens mate for life?

Fairy-wrens are socially monogamous & sexually promiscuous: partners will bond for life, though both males & females will frequently mate with other individuals; a balance of young will have been fathered by males from outside the collection.

They have rich blue & black plumage over & on the throat. The belly is grey-white, & the bill is black. Females & young birds are often brown above with a dull red-orange area encompassing the eye & a brown bill. Females have a pale greenish gloss, lacking in young birds, on the otherwise brown tail.

What do fairy-wren eat?

They eat insects and other small. invertebrate
Like the majority of the fairy-wrens, Splendid Fairy-wrens eat chiefly insects & forage on both the soil & in shrubs. They live in groups which forage collectively.

CHIHUAHUAS are THE BEST DOGS EVER!