Among her principal acts of Resistance was stealing a bicycle from a German female military courier, which she then used to help carry communications.

She went on to take a role in large-scale or otherwise dangerous missions, such as seizing German troops, derailing trains, and actions of sabotage.

Segouin was born in the town of Chartres, France and grew up beside three brothers. Her father had been a decorated soldier throughout World War I. She attended school till the age of 14 when she began work on the household farm. 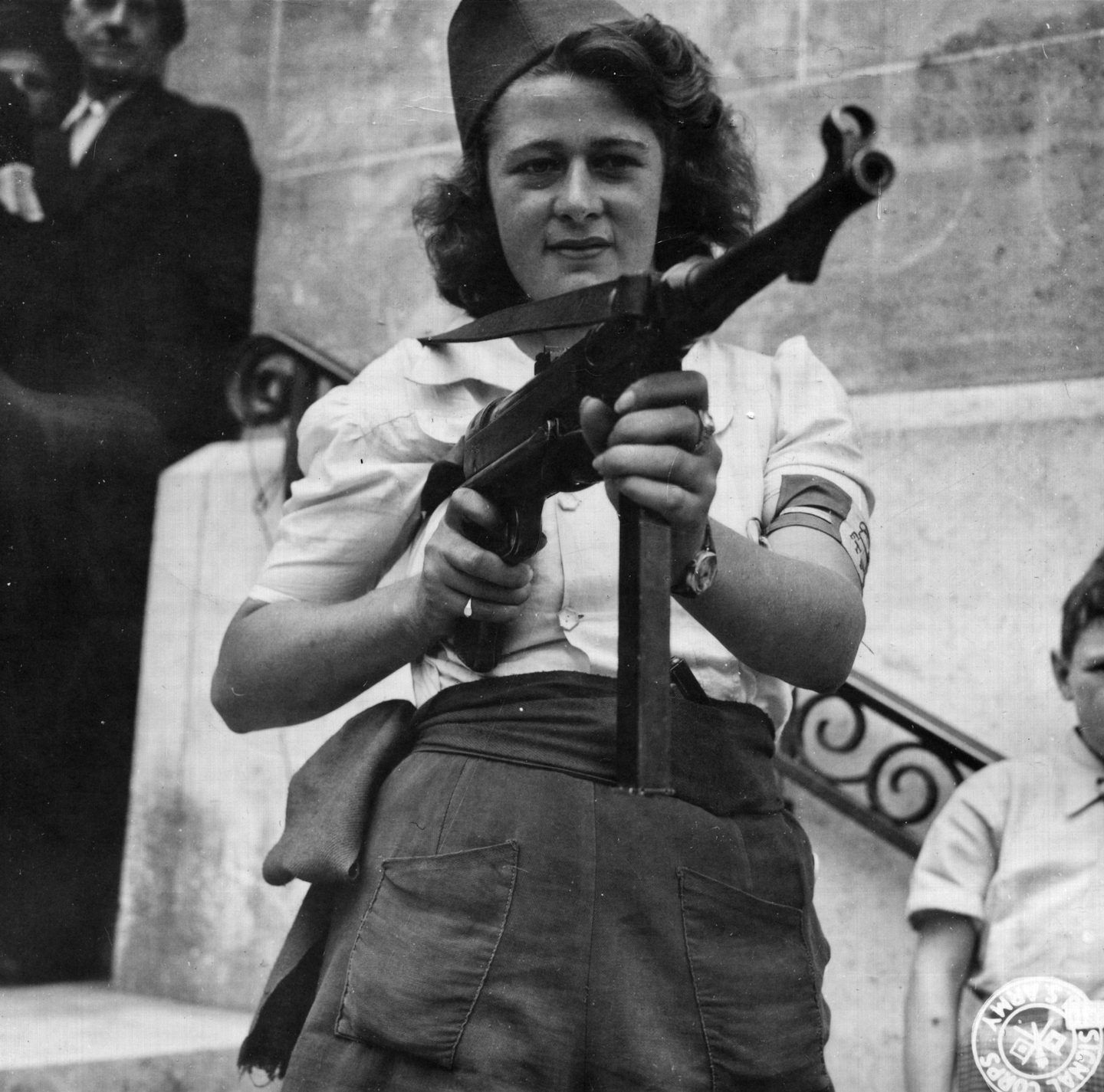 In a conversation with Jack Belden, published in Life magazine in 1944 under the heading ‘The Girl Partisan of Chartres’, Segouin & ‘Lieutenant Roland’ said that Segouin’s involvement with the French Resistance rose after the two met when she was just 17.

The Lieutenant taught her to use a submachine gun and introduced Segouin to other members of his organisation. To join the Francs-Tireurs et Partisans, Segouin acquired false identity documents, which confirmed her as Nicole Minet.

These papers classified her as being from the port of Dunkirk, which had been bombarded early in the war, making it hard for Germans to prove their authenticity.

Segouin began by working as a messenger. After taking out other small jobs, she later became more actively involved after engaging in a successful ‘train-exploding campaign’.

Lieutenant Roland or Roland Boursier, with which Segouin moved on to have six children. The duo never married, and all of the babies bore Segouin’s name.

Segouin was awarded at the liberation of Chartres on 23 August 1944, and the liberation of Paris two days following. She was promoted to Lieutenant and bestowed the Croix de guerre. Of her role in the Resistance, she stated:

“I was fighting for the Resistance, that’s all. If I had to start over, I would, because I have no regrets. The Germans were our enemies, we were French.”

Segouin gained global notoriety when photos of her by American photographer Robert Capa were distributed in Life weeks after the imprionment of 25 German fighters in which she took part. Belden ended his piece on her by writing:

“I could find no trace of what is conventionally called toughness in Nicole. After routine farm life, she finds her present job thrilling and exhilarating. Now that the war is passing beyond her own home district, she does not think of going back to the farm. She wants to go on with the Partisans and help free the rest of France.” 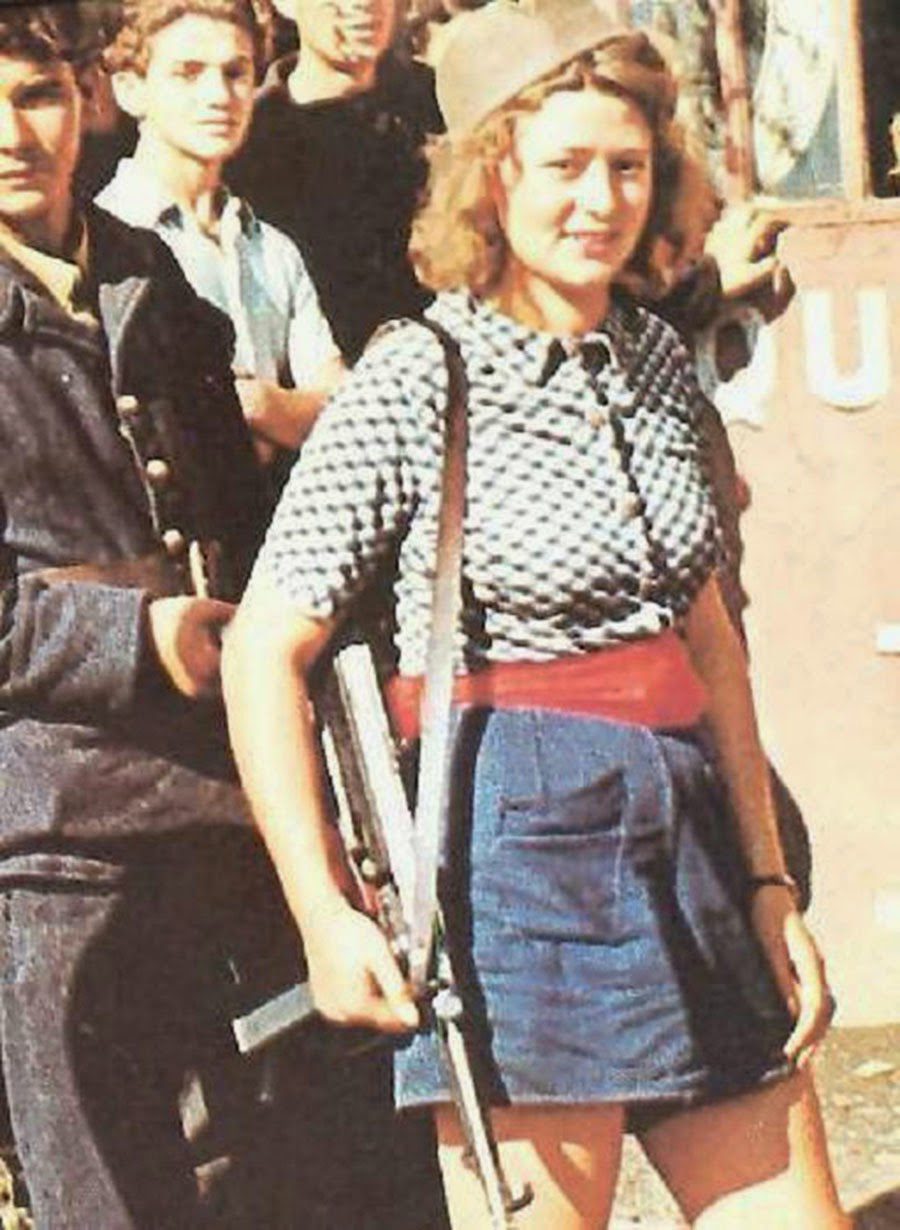 Simone asisten in liberating the historic city of Chartres, home of the famed cathedral, in August 1944. Later, General Charles de Gaulle, the Free French leader and eventual president, toured the city and gave a talk at the city square.

Journalists reporting the event were mesmerised by the sweet-looking girl devouring a baguette with jam – and toting a machine gun. She boastfully told the reporters that she was part of General de Gaulle’s security detail.

Simone was questioned by an American reporter for Life magazine and filmed by famed war photographer Robert Capa.

Simone was questioned if she’d ever killed anyone. She replied, “On 14 July 1944, I took part in an ambush with two comrades. Two German soldiers went by on a bike, and the three of us fired simultaneously, so I don’t know who exactly killed him. You shouldn’t have to kill someone like that.

It’s true, the Germans were our enemies, it was the war, but I don’t draw any pride from it.”

After the war finished, Simone was promoted to Lieutenant and given the prestigious award – Croix de Guerre.

Mayor Frederic Hallouin portrayed Simone as “A rebellious spirit, a strong character certainly, who took her father’s example and rejected the enemy occupying our country.”

Segouin became renowned as a symbolic representation of women in the Resistance. 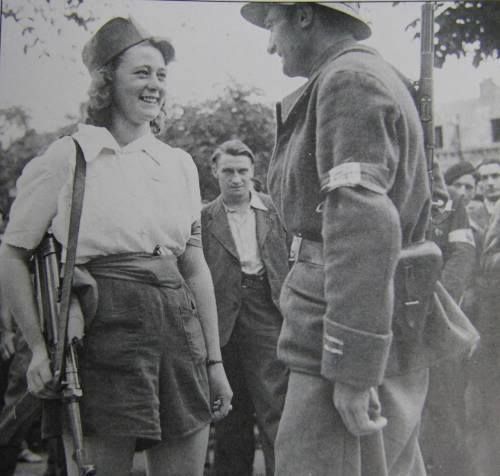 After WWII, Segouin was promoted to Lieutenant and honoured by being presented the Croix de Guerre. She was to become a pediatric nurse back in Chartres, “where her wartime exploits made her hugely popular.”

And her love with Roland Boursier was long-lasting. Even though they never married, they had six children, all of whom were given Segouin’s maiden last name.

Around four years ago, the British military foundation Soldering On presented her with a global award.

“The award is in recognition of your exemplary courage and devotion to the vital work carried out by the French Resistance during the Second World War. They were an inspiration for your fellow countrymen and women and those of us in Britain, more than 70 years ago and they continue to be to this day. We in Britain are still keenly aware of the vital role played by yourself and your comrades in weakening German morale…, often at great personal sacrifice. The French Resistance and your part in it proved critical in supporting our armed forces, especially those stranded behind enemy lines.”

Simone Segouin is still among us, described now as a fragile 94-year-old living in a nursing home in Chartres.

After World War 2, Segouin became a pediatric nurse in Chartres. A street in Courville-sur-Eure, in which she currently lives, was named after her. In response to the recognition, Segouin said:

“”I’m happy to know that people are not indifferent to this period of my life.””
In the year 2020, the Village Hall in Thivars was named after Segouin.

John Topham (1908–1992) lived an English social documentary photographer. He operated ongoing from 1927 to 1973, documenting & shooting the “ordinary way of life of ordinary people…the little things of life – the way it really was.” He is most noted for his photographs taken throughout the World War II-era – with some of his war photos appearing in Life magazine and one on display in the Imperial War Museum. He produced 121,228 negatives, which include 20,000 glass negatives of his first works. The TopFoto collection in Edenbridge has about 122,000 of his pictures, including 20,000 glass negatives.