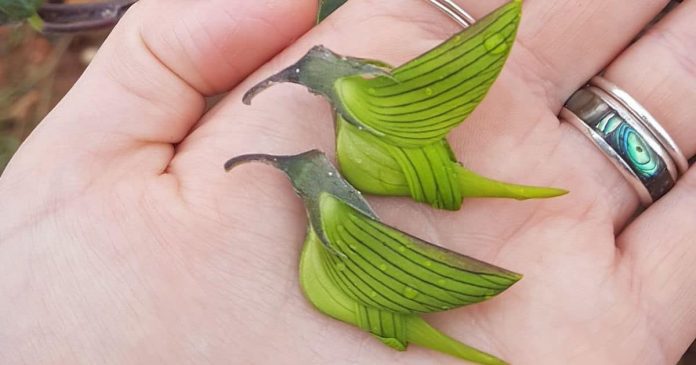 It is native to, & extensive, in inland northern Australia. It is a coloniser of shifting sand dunes, along shores & in Mulga communities. It is pollinated by large bees & by honeyeaters.

Green bird flower is a perennial (a plant that grows more than 2 years) bush that grows to about 1–3 m in height. It has hairy or woolly branches & soft green foliage. The oval leaves are around 30 mm long, the big & greenish pea flowers are streaked with fine black marks, & the club-shaped seed pods are up to 50 mm in length. 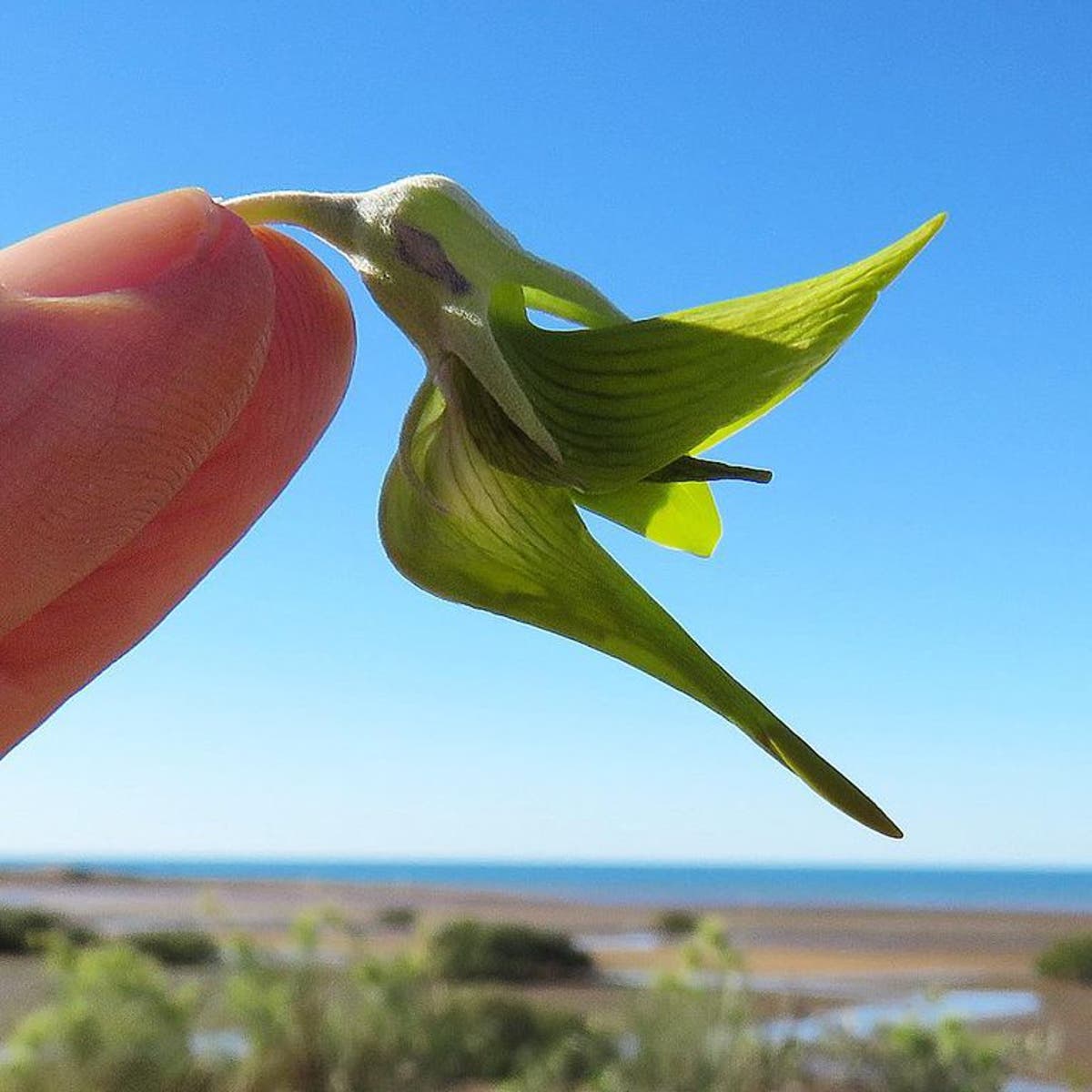 The plant’s flowers blossom on long spikes at the tips of its branches. The flower dramatically resembles a bird fastened by its beak to the centre stalk of the flowerhead.

The sap from the leaves was employed by Aboriginal people to heal eye infections.
The Green birdflower can be grown in warm areas. It needs well-drained soil & a full sun position. It does not like cold climates, or anywhere there are frosts. The propagation is from the seed, which quickly germinates following boiling water treatment, or from cuttings. 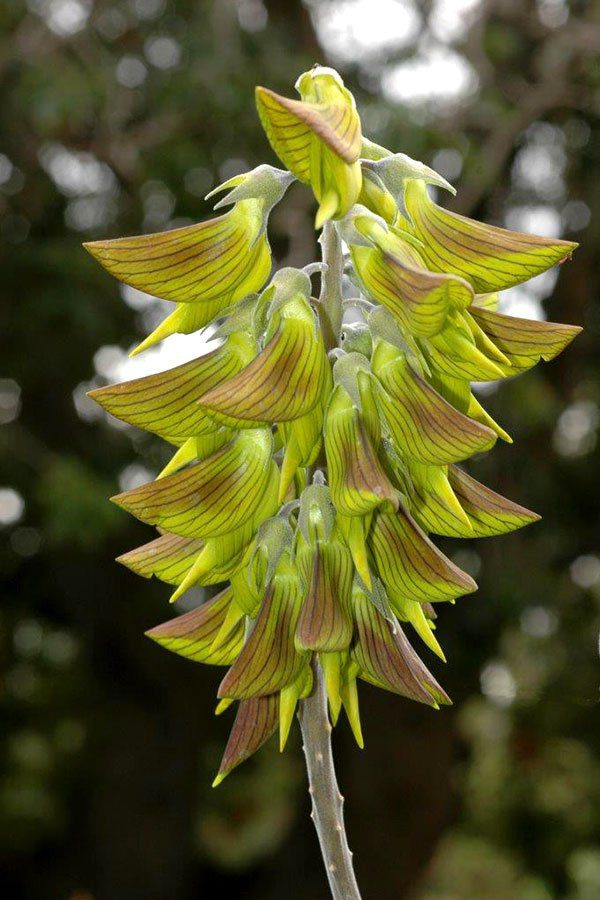 This native pea is all over the internet because its curious individual flowers resemble tiny green birds. Besides its curious appearance, it’s also excellent at fixing nitrogen into poor soils, & can bind sand dunes & soil banks to limit erosion – useful as well as attractive!

It’s a short-lived perennial plant. It’s a member of the pea family. Hence it grows these pods, and a common feature of this genus is that the pods rattle once they’re ripe. This is a nitrogen fixer, it’s a beautiful little plant.

It grows all over the northern part of Australia. The unique flower is a good one for warm and sunny positions as its native environment is in northern Australia. 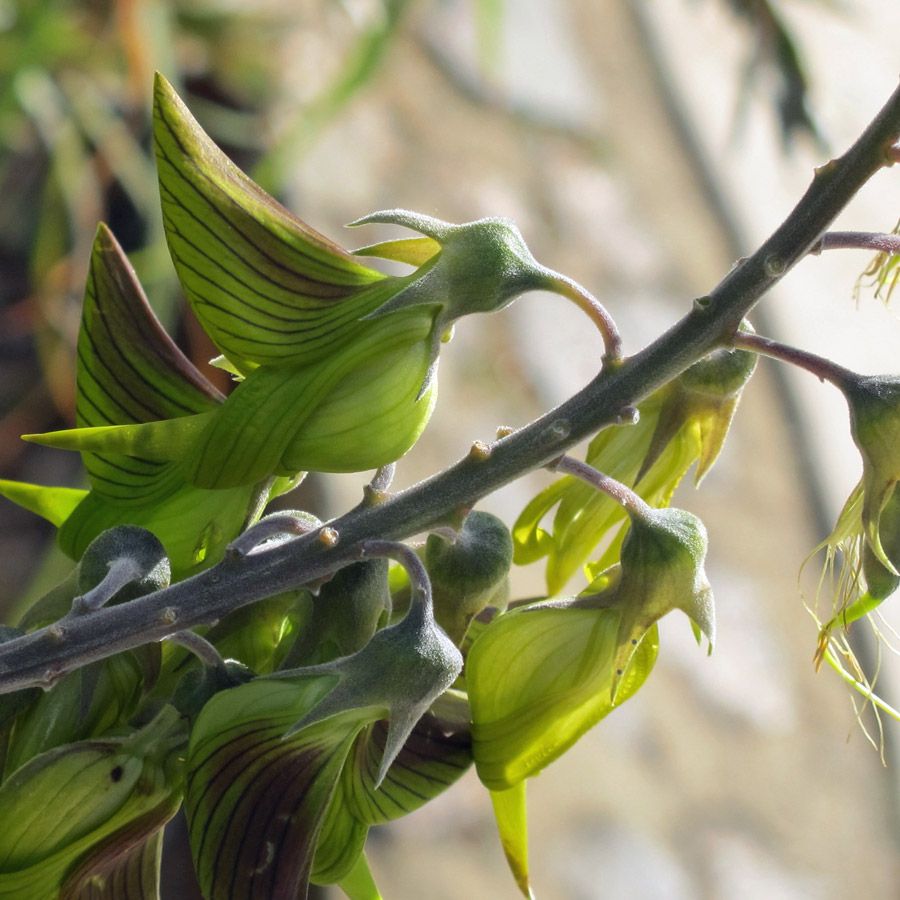 Crotalaria is a large variety of over 500 species; there are approximately 30 native to Australia, & numerous exotic species have become acclimated. They are usually small to medium shrubs or herbaceous species. They are recognised as “rattlepods” because the seeds are loose in the pods.

Crotalaria cunninghamii is a shrub that grows to about 3 metres tall with fluffy branches & foliage. The leaves are oval-shaped & about 30 mm long. The large, greenish pea flowers bloom in winter & spring on long spikes at the tips of the branches.

The flowers are streaked with little, black lines. The plant’s seed pods are up to 40 mm in length.

The sap from the leaves of this flower variety or species was used by aborigines to manage eye infections.

Green bird flower is relatively popular in gardening in warm areas. It needs well-drained soils & prefers a position in full sun. It is not suited to cool climates & is damaged by frost.
Propagation is from seed, which germinates quickly after treatment in boiling water, or from cuttings.

Crotalaria cunninghamii is a short-lived (perrenial) shrub that grows upright and is widely distributed throughout the northern section of Western Australia, from the coast through to the deserts, mostly on drainage lines & sand dunes.

This flower species grows up to four metres high and with large oval-shaped, velvety grey-green leaves & foliage. But its most fascinating characteristic is its quantity of large, vivid green pea flowers that are finely striped with purplish-brown ‘veins’. 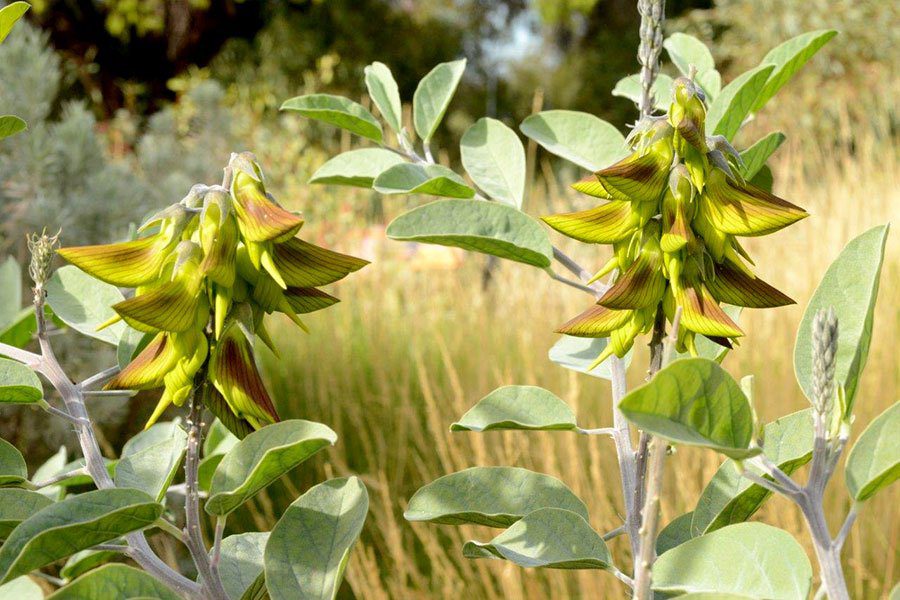 The fascinating Flowers are displayed in terminal clusters, with each one closely resembling a bird that is attached by its ‘beak’ (the calyx) to the tip of the stems, hence its common name.

The green bird flower mostly blooms from January to April in Perth or longer in its natural environment, followed by velvety, club-shaped seed pods around four to five cm in length.
C. cunninghamii is a bird-attracting plant ideal for low screening & borders. 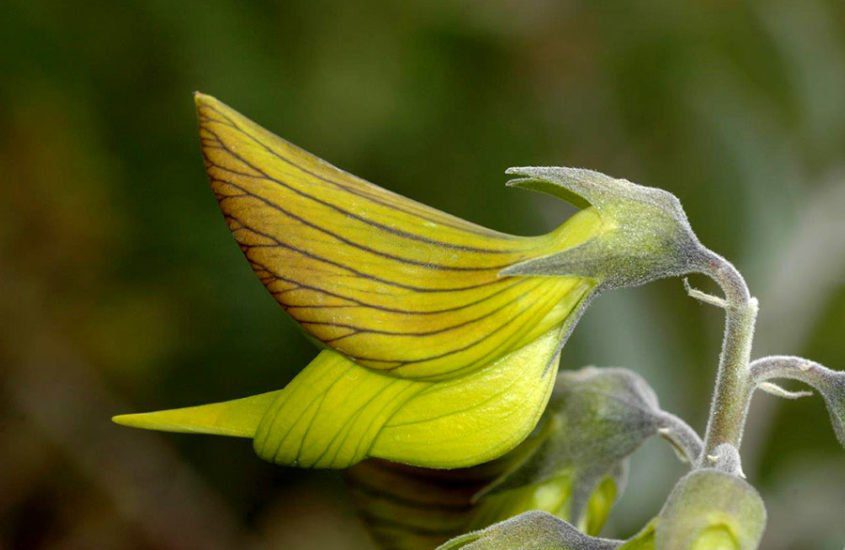 Where can I find crotalaria Cunninghamii?

Scientifically identified as Crotalaria cunninghamii, named after the 19th-century botanist Allan Cunningham, the petite green shrub is native to Northern Australia. You can buy the beautiful Green Bird Flower from nurseries wherever sold. Just type in “buy Crotalaria cunninghamii” or “buy green bird flower” into Google.

Can crotalaria Cunninghamii be grown indoors?

In regions that encounter freezing temperatures throughout the winter, bring the plant indoors till spring. This shrub needs full sun & a well-drained soil but is actually drought-tolerant. Seeds for the plant are available on the internet.

How do you grow crotalaria Cunninghamii from seed?