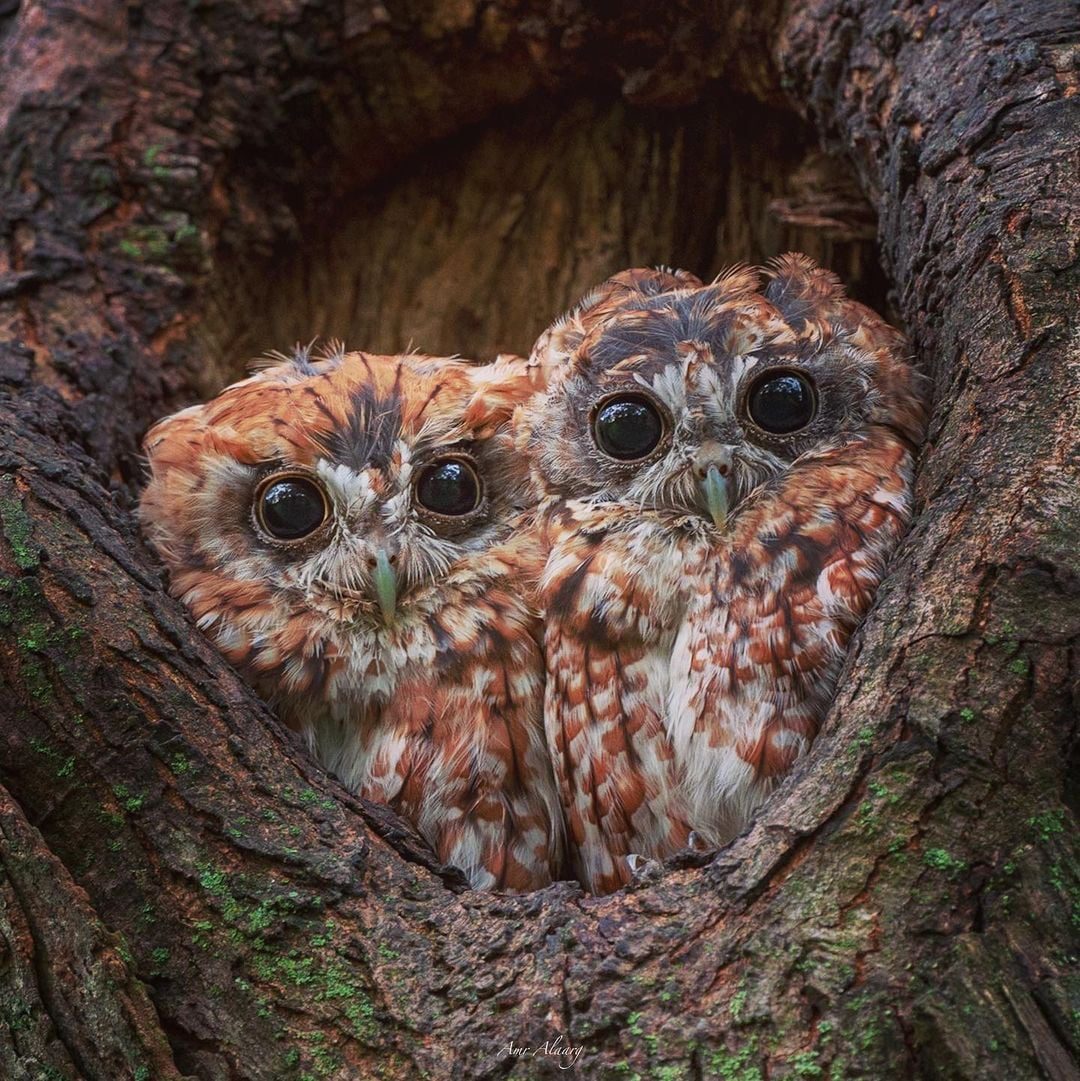 Screech Owls are a type of owl (Strigidae) part of the genus megascops with 23 species.

The Americas are the only place where screech owls can be found. Some species that were once placed with them are now considered more distinct (see below).

Like other owls in the family, screech owls’ females are larger than their male counterparts. They are compact in size and shape. They are agile and small, measuring approximately 7 to 10 inches in height and with a wingspan of 18 to 24 inches.

Their prominent, well-set feather tufts are bright yellow/green and have bright green eyes. They come in a variety of brownish colours with a whitish-patterned underside. They can be camouflaged against tree bark by using this colouration. 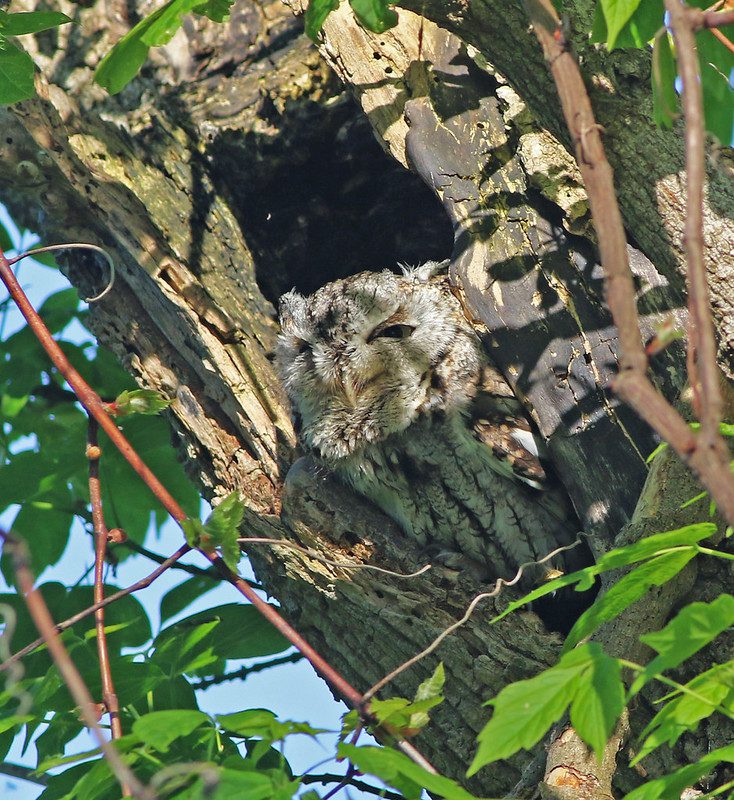 Perches are found in semi-open areas where screech owls can be seen hunting from. They are attracted to areas with old trees and hollows. These are the habitats of their prey, including insects, reptiles, and small mammals like bats and mice. The ability to hear is a crucial feature of screech owls, which allows them to locate prey in any habitat.

Their raptorial claws are well-developed, and their bill is curved. These can be used to cut down prey small enough to eat quickly. To protect themselves from losing their prey to larger birds, they often return their prey to their nests. 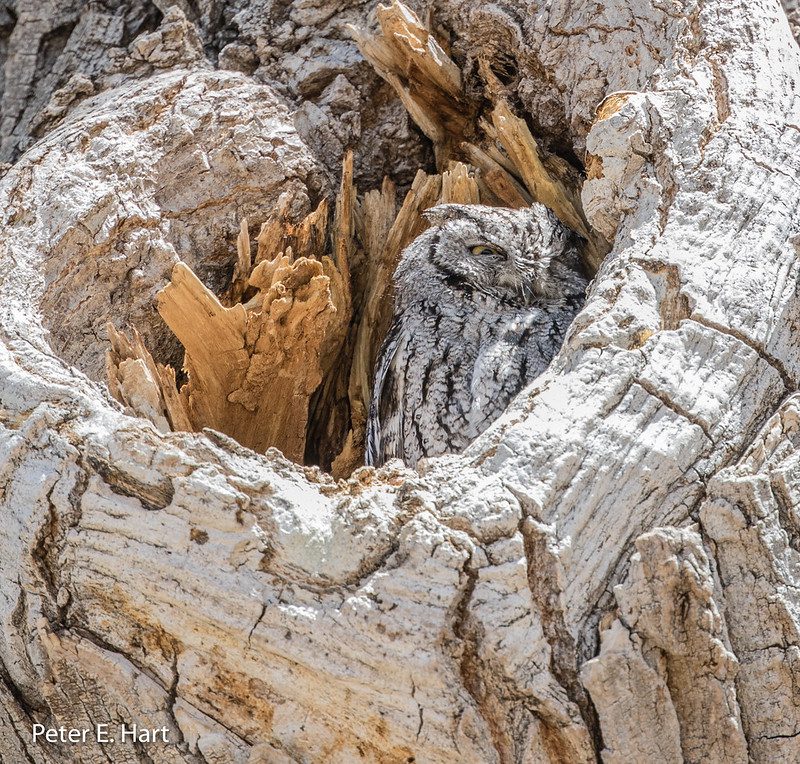 Screech Owls are primarily solitary. In the winter, males build nests in cavities to attract females. Females choose their mate based upon the quality of the cavity as well as the food inside. The male provides food for the female during incubation. These birds are monogamous and receive biparental care. Most screech owls’ young are semi-altricial to altricial. 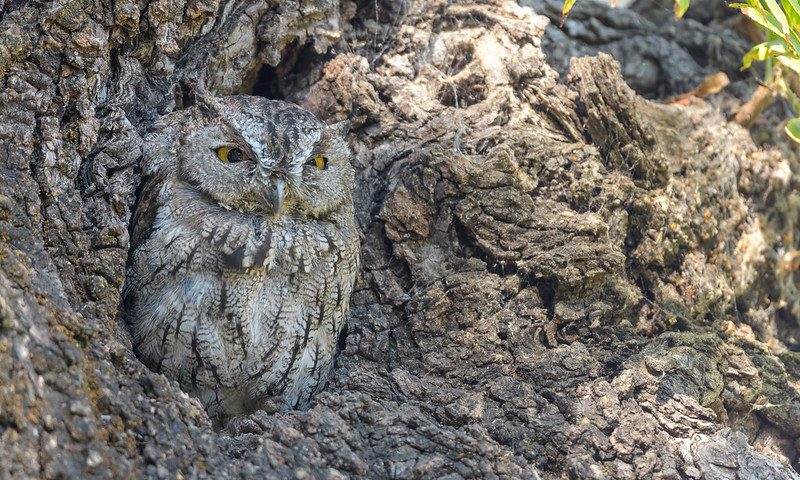 Their usual territorial call is not as loud as some other owls. Instead, it’s a trill that consists of four calls per second made in rapid succession. However, the sound doesn’t resemble screaming or screeching. A song is also used by them in courtship and as a duet between the members of a couple.

These calls can vary widely in pitch and type between species, making them the best way to identify them. When vastly different calls from birds in adjacent areas were first noted, it was clear that many species of screech-owls are distinct. 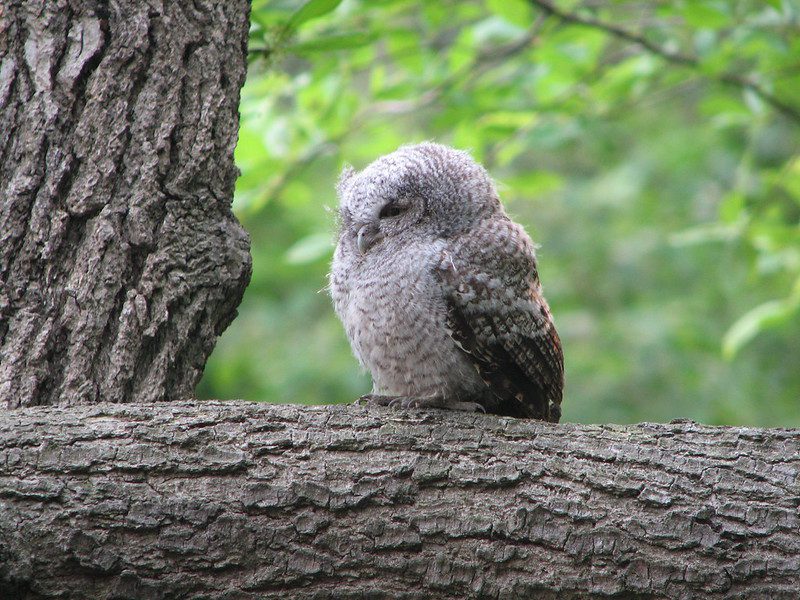 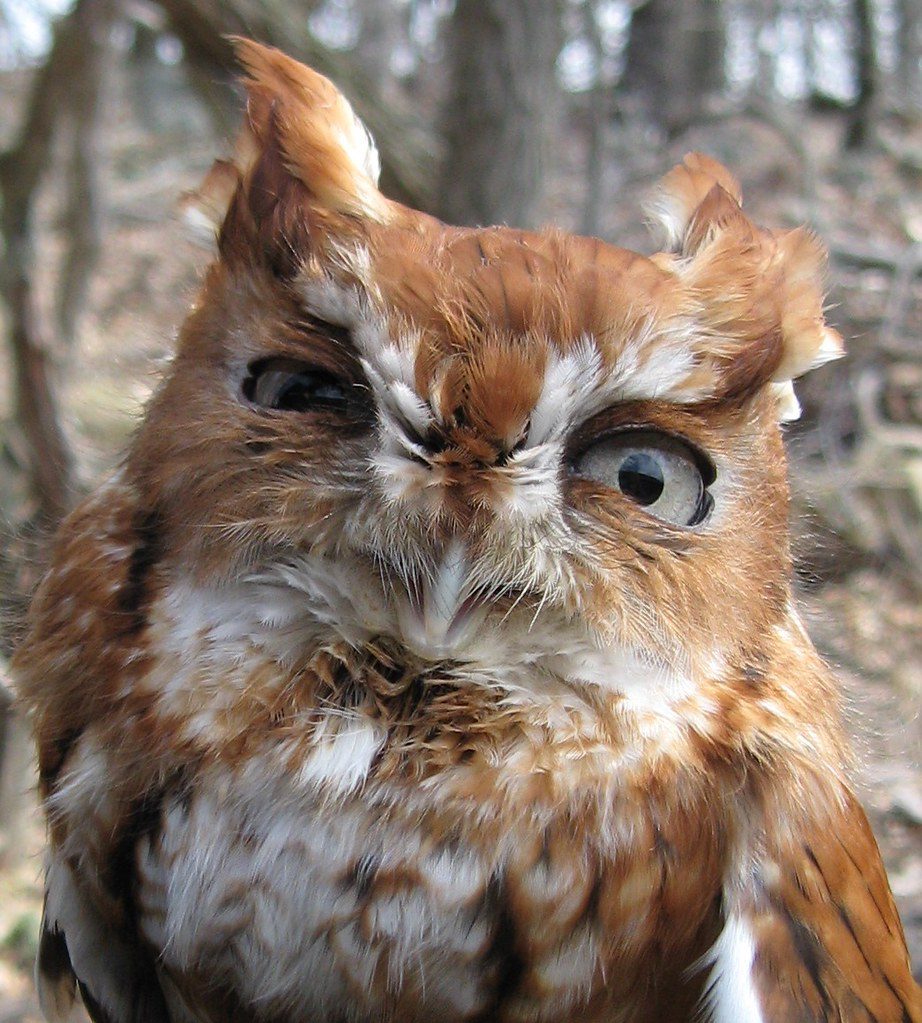 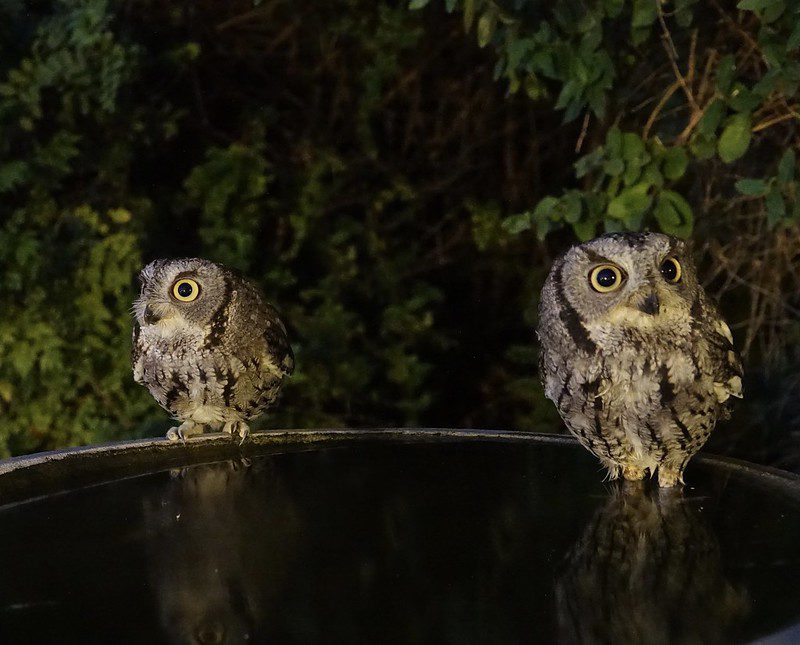 How To Identify The Screech Owl In The Wild

They are around eight inches tall, with yellow eyes. They have ear tufts, which are obvious when raised. The breast and belly are densely streaked and spotted with black. Eastern Screech Owls have a light-coloured beak and perform a descending trill or whinny vocalisation. 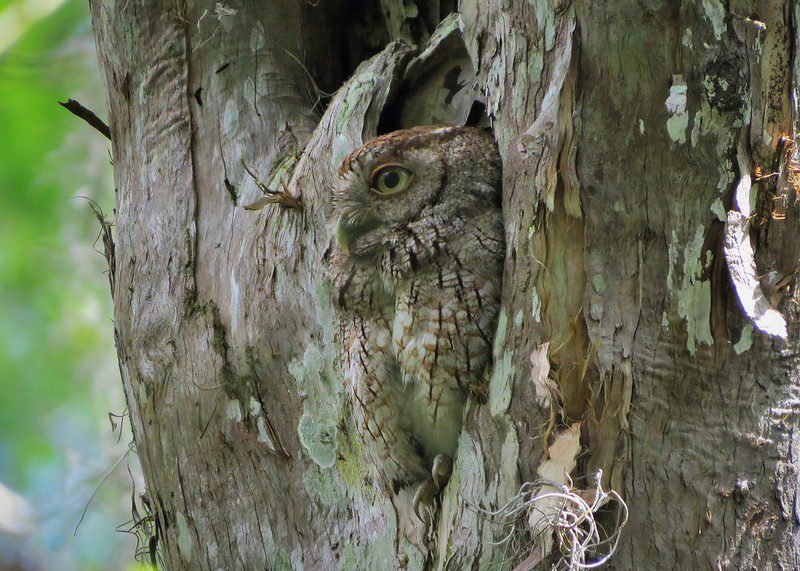 Eastern Screech Owls are located east of the Rocky Mountains to the Atlantic. This subspecies varies from the Canadian boreal forests south to Mexico.

Where Are Screech Owls Found?

They live in all forest classes and favour woodlands distributed with the open clearings, meadows, and fields required for hunting. They also occupy wetlands, orchards, suburban parks and gardens, and towns.

Before the breeding season, males protect an area comprising several cavities. As part of guarding their territories, males spend every night in a different cavity. Female Screech Owls choose a nest site from the cavities in the male’s boundary. Females favour choosing cavities that have been well provided with food by the male.

They also favour cavities in which they have strongly raised young in previous years. Nests are typically located in natural cavities, deserted woodpecker holes, and hollow stumps and limbs. The western species also nests in saguaro cactus hollows and discarded magpie nests. Eastern Screech Owls lay three to four eggs in a clutch. 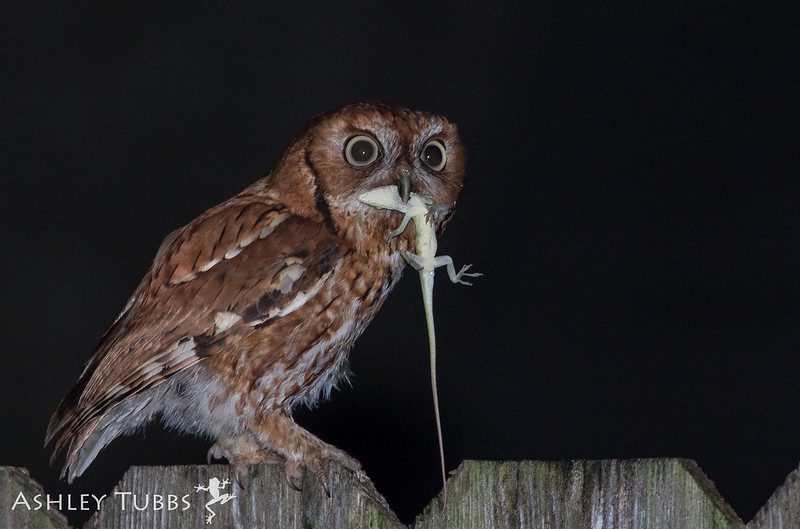 The incubation phase is 26 to 30 days. Because incubation normally begins with the first egg, the eggs progress at different rates and hatch at varying times (asynchronous hatching.) Nestlings leave the nest in the order they hatched; older babies leave first, and younger ones embark on following days.

Their diet is one of the most diverse of any North American owl species and is region-specific. They dine on insects, crayfish, earthworms, and all types of vertebrates, including songbirds, reptiles, fish, amphibians, and small mammals such as shrews and voles.

What is the night’s screech owl sound? The Eastern Screech Owls make a sound called tremolo, which is an even tone trill. This allows them to communicate during the night since they are nocturnal birds. 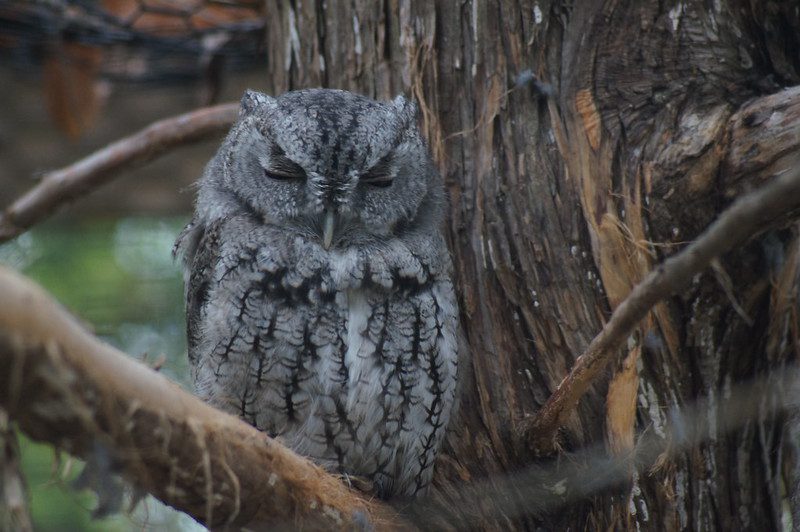 Why are they known as screech owls?

What is the reason they are called Screech-Owls? They screech! There are many calls for the Screech Owls. The most common sound they make is an even-pitched trill (also known as a “bounce song”, or tremolo) and a shrill, declining whinny.

Are baby owls able to chirp at night?

Sometimes, infant owls can be heard shrieking at night. Owlets follow the same nocturnal pattern as their parents. Owlets awake at night to find their parents and will leave the nest for the baby owls. 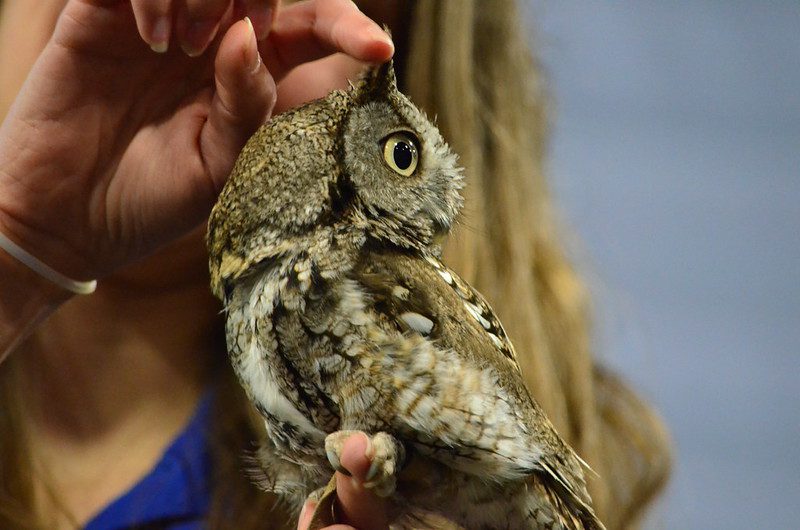 This owl can be aggressive in defending its nest site and may even attack humans. The Western Screech-Owl is fast in a direct flight and has a steady wing beat at 5 strokes per second. The Western Screech Owl rarely hovers or glides but can fly bat-like through wooded areas, with some erratic movements.

Owls are very opportunistic and will eat any animal they find. While Barn Owls prefer rodents, small owls like the Screech-owl eat insects. 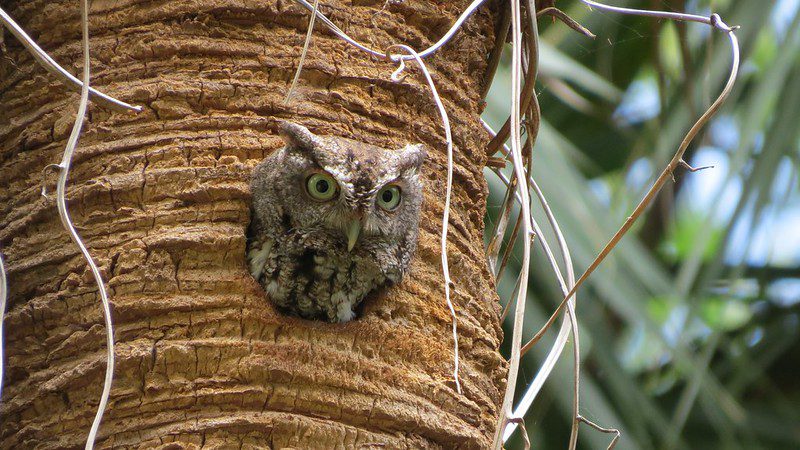 Can screech-owls be kept as pets?

The United States prohibits private owners from keeping native owls as pets.  They can only be owned by licensed, trained individuals while being rehabilitated, as foster families in rehabilitation facilities, as part of an educational program or for falconry purposes.