The beautiful Asian cat named after its distinctive spotted coat is rarely seen in the wild and its behaviour remains a mystery. Clouded leopards can be found in Asia’s rain forests, as well as the Himalayan foothills. Although little is known about their numbers, they are considered to be a vulnerable species.

The clouded Leopard ( Neofelis Nebulosa), is a wild cat that lives in dense forests, from the Himalayas to South China. In 1821, the first known clouded leopard was described by science. It was brought from China to London in the early 19th century.

It is characterized by large, irregular spots and stripes that resemble clouds and has dusky-grey blotches. The length of its head and body is 68.6 cm (27.0 to 42.5in) and it has a 61 cm (24-36in) long tail. It balances in trees by using its tail and can climb vertical tree trunks head-first with its tail. It sleeps in trees and hunts at night on the forest floor.

The total population of the clouded leopard is thought to be less than 10,000 adults. There has been a declining trend in its population and only one population that exceeds 1,000 adults. Since 2008, it has been listed as vulnerable on the IUCN Red List.

Large-scale deforestation and poaching for wildlife trade threaten the population. Although it is legally protected in most countries, its body parts can be used for decoration and clothing. 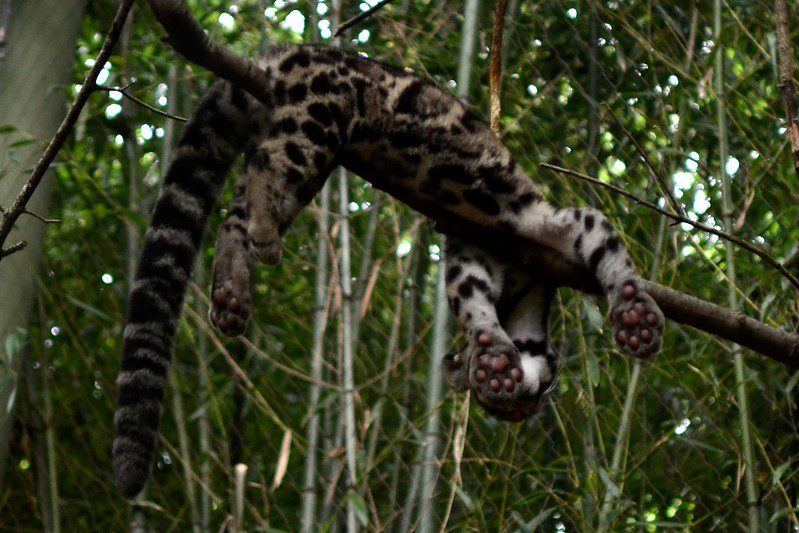 While most cats can climb, the clouded leopard is a master climber. These large cats can hang upside down under large branches using their sharp claws and large paws. Clouded leopards have powerful, short legs that can be used to climb in a headfirst position. They also have rotating rear ankles which allow them to do so with their strong legs. The cats have sharp eyesight and use their long tails for balance.

Behaviour in the Wild

Although clouded leopards can climb, scientists believe they spend most of their hunting time on the ground. They eat deer, monkeys and small animals like squirrels and birds. The largest canine teeth of any wild cat (proportionately to their body size) aid them in hunting.

Scientists don’t know how clouded leopards behave in the wild. Like most cats, they are likely solitary animals. The female leopards usually give birth to one to five litters each year. Young leopards are dependent on their mother for approximately ten months.

Clouded leopards have dark grey fur, which is often darkened by blotched patterns and black. The ears and head have black spots. The stripes are partially fused or broken up and run from the corner to the cheek to the neck. They also run along the nape to your shoulders.

The median stripe is formed by a single median line at the loins. The two large, dark-dusky-grey blotches on each side of the shoulders are highlighted posteriorly by a dark line that runs along the foreleg and splits into irregular spots. Dark dusky-grey irregular hair blotches are used to mark the flanks.

These blotches are bordered by long, oblique, looped, or irregularly curled stripes. The clouded pattern is a result of these blotches. The tail has large, irregularly paired spots and is marked with spotted underparts and legs. It has short legs and broad paws. Females are slightly smaller than males. 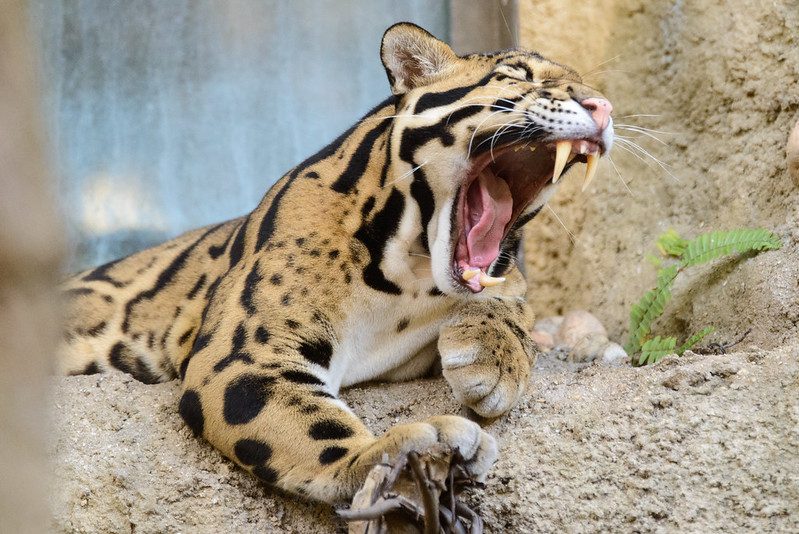 Clouded leopards can be found in the Himalayan foothills of Nepal, Bhutan, India, Myanmar, Southeast Bangladesh, Thailand, Peninsular Malaysia and south of the Yangtze River, China. It is currently extinct in Singapore, Taiwan and other regions.

In India, it occurs in Sikkim, northern West Bengal, Meghalaya subtropical forests, Tripura, Mizoram, Manipur, Assam, Nagaland and Arunachal Pradesh. In Pakke Tiger Reserve, a clouded leopard was photographed in the semi-evergreen forest at an elevation of 144 m (472 ft).

It was first recorded in Bhutan in Jigme Singye Wangchuck National Park and Jigme Dorji National Park in 2016. The first time it was captured in Myanmar was in 2015 by camera traps in the hill forests in Karen State.

It is found in Thailand’s Huai Kha Khaeng Wildlife Sanctuary, and close-forest habitats at Khao Yai National Park. Also, in Cambodia, it can be found in Phnom Prich Wildlife Sanctuary in deciduous dipterocarp forests between 2008 and 2009. 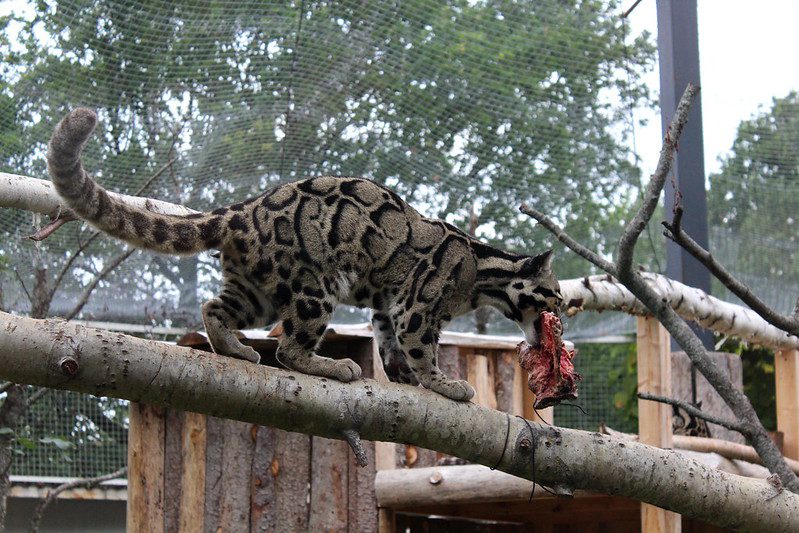 The clouded leopard hunts by stalking its prey, or waiting for it to approach. It usually hides in trees after making and eating a kill. It eats both terrestrial and arboreal vertebrates.

Reproduction and the life cycle

Males and females both average 26 months for their first reproduction. The female is in estrus for approximately six days. Her oestrous cycle lasts about 30 days. Mating occurs most often between December and March in the wild.

Over several days, the pair may mate multiple times. The male grabs the female’s neck and responds vocally. He may bite her occasionally during courtship, and he can also bite her during sexual encounters. One litter can be produced each year by females. The male does not have to raise the cubs.

After a gestation period between 93 +- 6 and 93 +- 6, the female gives birth to one to five cubs. They have dark spots that are not surrounded by dark rings. After about 10 days, their eyes open. They become active in five weeks. They reach adult-like coats at six months of age and are fully independent by ten months.

The average lifespan for captive clouded leopards is 11 years.

The generation length of the clouded leopard averages seven years. 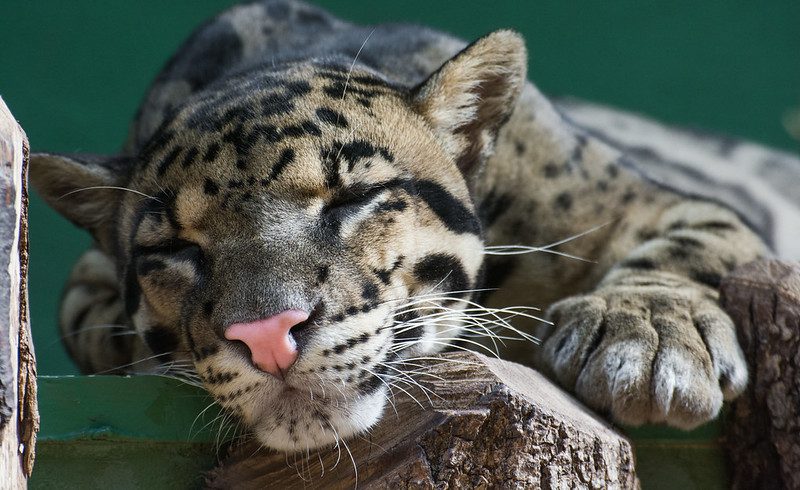 Many of the remaining forests are too small for clouded leopards to survive indefinitely. This is due to habitat loss and poaching for wildlife trade. For decoration, teeth, claws and skins are used as ornaments and for meat, bones, and bone replacements for the tiger’s body in traditional Asian medicine and tonics.

Although few poaching incidents have been reported, it is believed that all range states have experienced some form of commercial poaching. In recent years, there have been substantial domestic markets in Vietnam, Indonesia, and Myanmar

Four markets were surveyed in Myanmar between 1991 and 2006 and found 301 body parts from at least 279 clouded Leopards. These included skins and bones. Three of the four surveyed markets were located on international borders with China, Thailand, and Myanmar and cater to international buyers. However, clouded leopards remain completely protected by Myanmar’s national legislation.

Between November 1988 and March 2020, 27 cases of body parts of clouded leopards were found in Nepal. These bodies were located in nine districts, which include at least 51 individual clouded Leopards. The poachers and traders were convicted in 17 cases.

The Endangered Species Act in the United States lists the clouded leopard as endangered. This prohibits trade in live animals and body parts.

International Clouded Leopard Day (August 4, 2018) is observed in zoos around the globe. 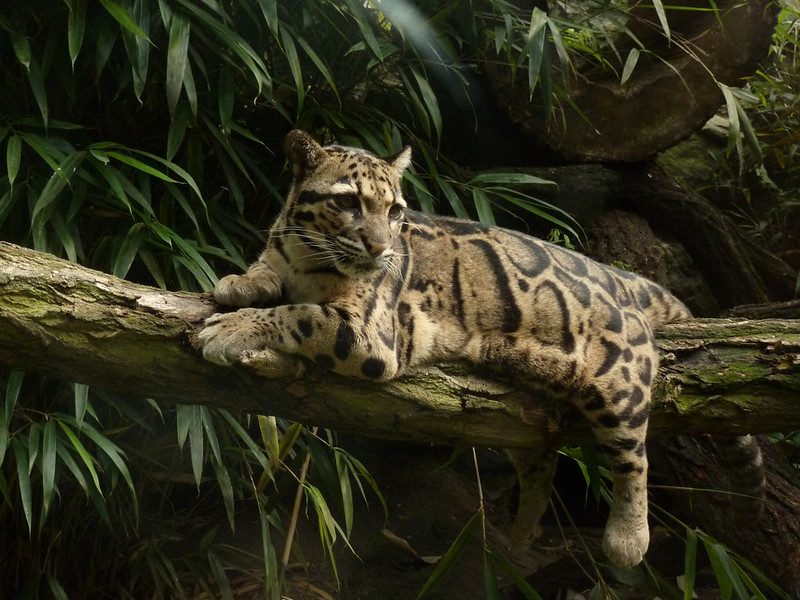 Since the beginning of the 20th century, clouded leopards were kept in zoos. In the 1970s, an international studbook was established. In the 1980s, coordinated breeding programs were established. They include the European Endangered Species Programme and the Species Survival Plan. As of 2014 64 institutions kept clouded leopards, six of which are Indian zoos:

Clouded leopards are a common species in captivity. However, early captive breeding programs did not succeed due to their courtship behaviour. Males are known for being aggressive towards females. Male and female clouded leopards must be compatible to breed. Introducing them at an early age allows them to bond and mate.

A study of the mortality and morbidity of 271 clouded leopards kept in captivity at 44 zoos throughout Asia, Europe and Australia revealed that 17% died from respiratory disease, 12% from maternal neglect and starvation, 10% were victims of generalized infectious diseases and 10% from digestive disorders.

Is there any clouded leopard left in the wild?

The clouded leopard is a highly endangered species. While legally protected in most countries of the range, enforcement is often weak in some areas. It is believed that less than 10,000 mature individuals are still wild, and there is no single population of more than 1,000 animals. 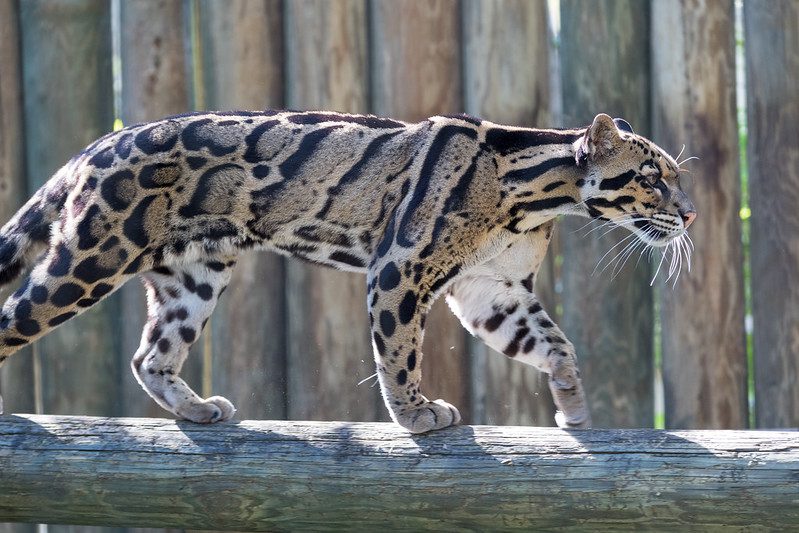 Which big cat is the greatest climber?

Leopard. The most common big cat is the leopard. A leopard is the strongest climber of all big cats and can haul prey twice as heavy up a tree. Snow leopards can leap seven times the length of their bodies in one bound thanks to their long, muscular hind legs.

Is it illegal to keep clouded leopards?

The Australian Orb Weaving Spider – A Master Of Webs