The Fantastic Colours Of A Carpet Chameleon

The Carpet Chameleon (furcifer lateralis), also called the white chameleon, is an endemic species of Madagascar. John Edward Gray described it in 1831.

Furcifer longilateralis can be found primarily in central Madagascar. The International Union for Conservation of Nature (IUCN) states that the species can be found in Madagascar, except for the northern areas.

The  Carpet Chameleon can reach maximum lengths of 17 to 25 cm (6.7 to 9.8 inches) for both sexes. Males are primarily green, while females are more muscular and can display a wider variety of colours, including yellow, white, and orange.

Both sexes have striped lips and throats. They tend to change their colour according to their moods and the environment. They are shy and can even change their throat colour.

Carpet Chameleon adults reach maturity at three months. Females can lay up to three clutches per year and can lay eight to twenty-three eggs simultaneously. The eggs must be kept at approximately 24 degrees Celsius (75 degrees F)

Chameleons are often considered to be masters at camouflage. We believe that chameleons have evolved to blend in and trick predators by their ability to change their colour.

What would you think if I said that camouflage wasn’t the primary reason for chameleons’ colour changes? This next entry will explain how chameleons change colour. We’ll also show you how these mysterious animals change colour for many reasons.

Chameleons (Chamaeleonidae Family) are very cryptic lizards. Their colouration is often very similar to their habitat’s. Many chameleon species can change their colour, which makes their camouflage even more complicated.

Many misconceptions surround chameleons’ ability to change their colour.

How do chameleons alter their colour?

Other animals such as cephalopods, fish, and lizards also can change their colours. It is usually achieved by chromatophores which are a type of pigmentary cell found in ectothermic species.

The chromatophores, which are found in colour-changing animals, can be distributed in multiple layers. They can expand, contract, aggregate, disperse and change colour, resulting in different colours.

Recent research has shown that chameleons can change the colour of their skin to extremes. A team of biologists, physicists and scientists was conducting this study when they discovered something extraordinary: Chameleons don’t have any green pigment! It was believed that chameleons could change their colour using their chromatophores. 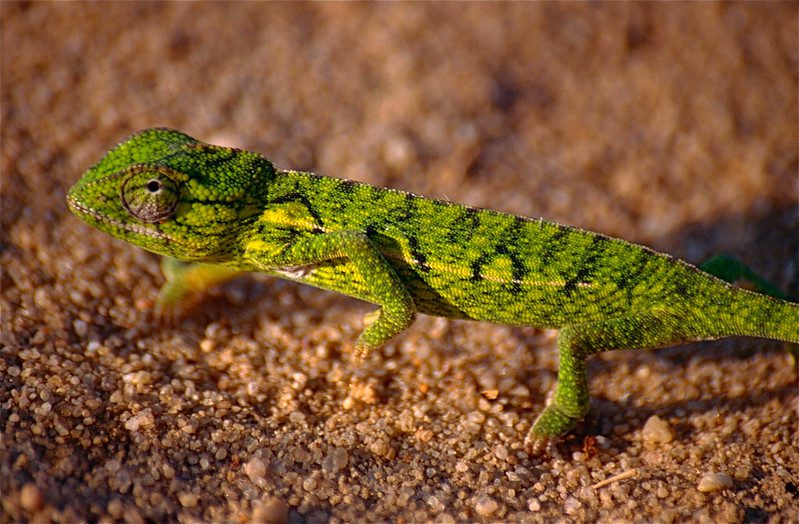 To understand how chameleons can change their colours, we need to distinguish between animal colouration types: structural and pigmentary.

As we have previously explained, structural colour is created by the refraction light and some skin microstructures. Because pigments in the tissues of an organism (such as melanin found in human skin) create the colour, the most common colour is called the Pigmentary Colour.

Chameleons have black, red, and yellow chromatophores that they can expand and contract voluntarily. In a study with panther Chameleons (Furcifer paradalis), it was also found that they have two layers of Guanine nanocrystal-bearing cells called iridophores. These reflect light. The blue light reflected from the iridophores, passing through the outer yellow colour chromatophores, gives a chameleon its green colour.

Chameleons also have a set of neural circuits that allows them to control the composition and distance between the nanocrystals of iridophores in different areas of their skin.

This allows them to control the wavelength of light reflected by the Iridiophores, and thus the colour. The chromatophores can be combined with the different species of chameleons to cover the entire visible spectrum of colours.

There are differences in the colouring of panther chameleons when they are excited and relaxed. This is also related to the distribution and composition of the iridophores microcrystals. 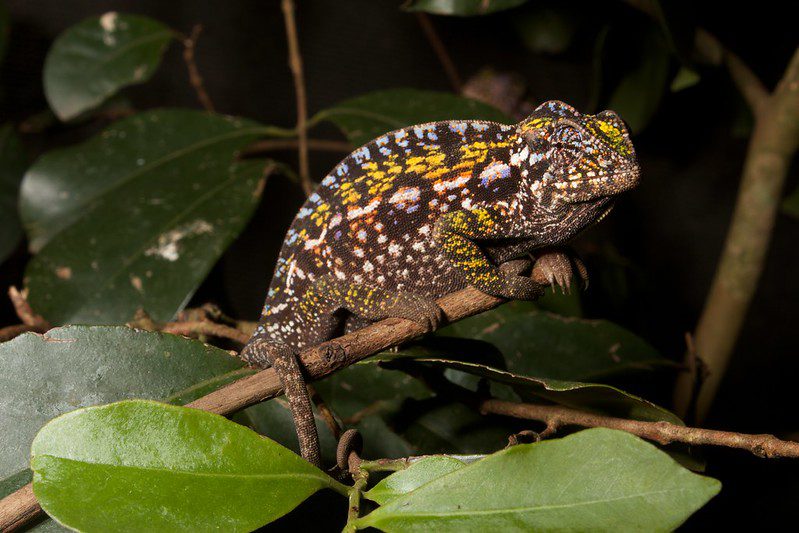 What is the purpose of changing colours?

Although other chameleon species can change colours, it is usually due to a physiological response to temperature regulation, excitement, or changes in reproduction.

Chameleons also have a significant part of their nervous systems that allows them to change colour quickly, consciously, and reversibly. They can change the colour of different skin regions, making them appear more red or orange, and vice versa. This creates striking contrasts and colours.

Then, why do chameleons alter their colour? The truth is that chameleons’ kaleidoscopic abilities are different, and they have other functions.

Camouflage is the most important, if not the apparent motive. Although the standard colouration for most chameleon species is not very obvious, they can blend in with their environment if necessary. This allows them to blend in with their surroundings and avoid being detected by prey. However, it also helps them to remain unnoticed or be spotted by predators.

In a study with Smith’s dwarf Chameleons (Bradypodion.taeniabronchum), it was also proven these were capable of adjusting the extent of their colour shifts to match the visual capabilities of their predators . 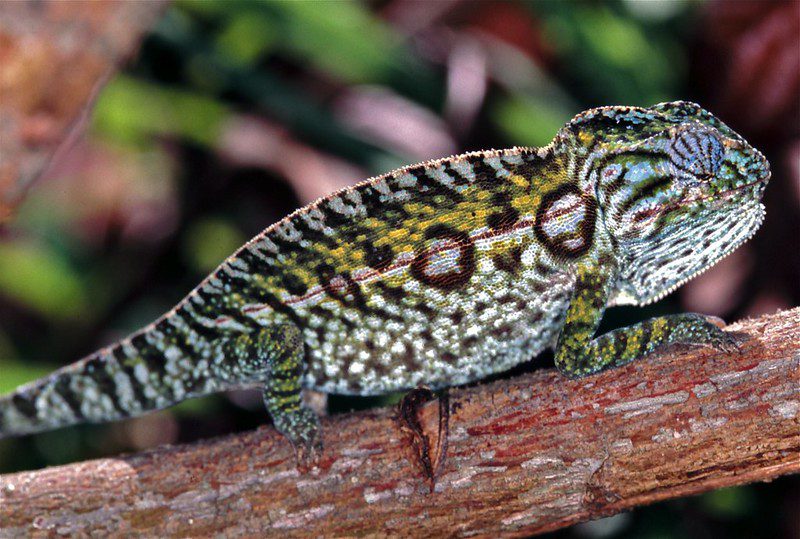 Like most reptiles, chameleons are ectothermic. They rely on heat from outside sources. Apart from the more superficial iridophores (called S-iridophores), chameleons have a deeper layer of iridophores called D-iridophores, which (even if they present a much messier nanocrystal structure that cannot be modified) highly reflect infrared light. It is thought that they must have some thermoregulation-related function. Other lizards have iridophores that are similar to D-iridophores.

D-iridophores are not the only thing chameleons use to adjust their body temperature. This is more evident in species that live near extreme environments. We have already explained that the Namaqua Chameleon ( Chamaeleo namaquensis ), a species that lives in deserts in South-West Africa, has a nearly black colour in the morning to absorb maximum heat. It then turns a light whitish during the hottest hours to reflect maximum sunlight. 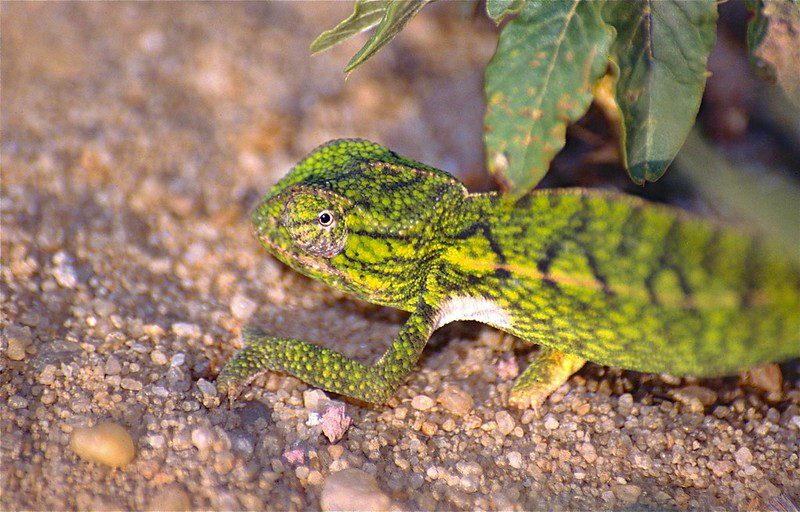 Interspecific communication is the primary purpose of chameleons’ colour changes. In some countries, chameleons use liveries, which are different colours that can be used to communicate information to their species. This includes information about their stress level, reproductive status, health, and so on.

Chameleons usually have a similar standard colour to their habitat. This colour pattern is typically indicative of a healthy animal. However, chameleons who feel sick or have a physical problem will often display paler or duller colours.

Many species have females that display more contrasted and conspicuous patterns in heat. However, they will show darker colours after mating.  Males display more striking patterns during mating season to signal their intentions to their females and warn their rivals. These signals help males identify which females are available and which ones they should save their energy.

Furcifer female carpet chameleon. It has a pattern that suggests that it is already pregnant and does not want to mate. Bernard Dupont.

Finally, all chameleons are boldest in their colours when they encounter other chameleons of the same species. These situations are when chameleons use the most striking patterns to intimidate their rivals. 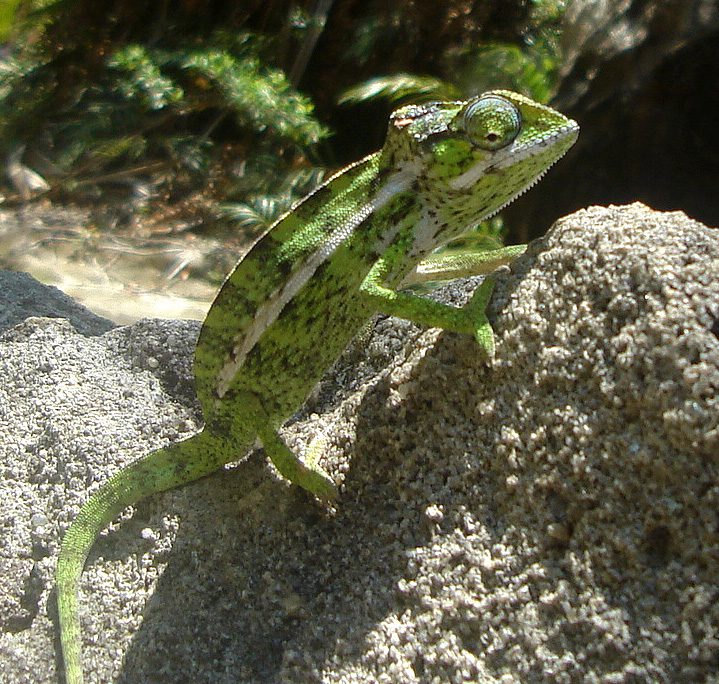 The carpet chameleon is a fascinating-looking reptile and is often overlooked. These fun-loving reptiles are easy to keep and require only an intermediate level of knowledge. They are beautiful and can be seen in a variety of patterns and colours. You’ll never tire of them!

What is the cost of a carpet chameleon?

What do carpet chameleons eat?

Carpet chameleons thrive on small-sized crickets, flies, and other insects. Feed five to six feeder insects with gut-loaded food each meal. I feed my chameleons two to three times per week and allow the feeder insects free reign of the cage.

What type of chameleon is best for beginners?

Most species have males that are slightly more resilient than their female counterparts. This makes them a good choice for beginners. Chameleons prefer to be alone and have separate cages. This is particularly important for males who can fight if they are placed in the same enclosure.

Like this article? Let us know your thoughts by clicking on this green icon
0
Any thoughts on this?x