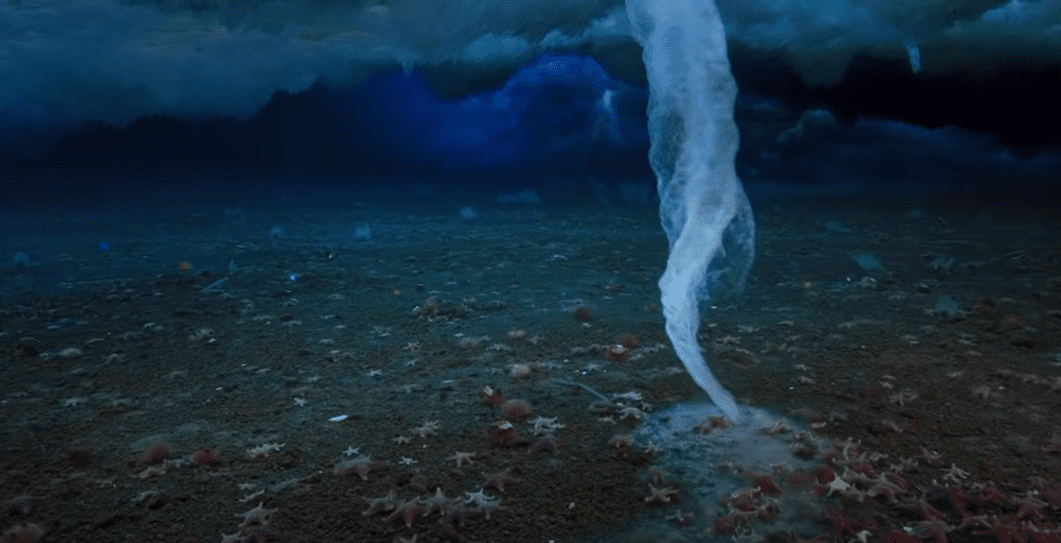 The Ice Finger of Death is Captured on Camera for the First Time. It Freezes Everything in Its Path

We can now see the formation of the “ice finger of Death” in some amazing footage for the first time.

Otherwise known as a brinicle, brine icicle or ice stalactite.

It’s rare these days to discover a new phenomenon that is entirely unknown to science. One that expands our understanding of the world in wondrous and beautiful ways.

As it has happened with many other uncontacted tribes and unseen caves over the years, the formation of Antarctic brinicles, also known as “ice finger of death”, was introduced to armchair adventurers via some stunning footage.

Brinicles, which look like finger-like structures and extend from floating sea ice to Antarctic waters, are a strange, otherworldly structure. Although scientists have known about their existence since the 1960s, they are seldom observed in real-time.

They are only found in certain areas in Earth’s Polar Regions, where blocks of floating sea ice make it difficult for them to be detected and almost impossible to capture on film. The below footage is from BBC’s Frozen Planet Series (Season 1, Episode 5) and is very special.

Ice on the ocean‘s surface is made up of two components, unlike freshwater frozen. The salt is removed from the water during freezing, which leaves the ice crystals relatively pure. This can lead to excess salt. It freezes at lower temperatures, so the salty water remains in liquid form. This creates highly salinized brine channels within porous ice blocks.

When the sea ice breaks down and releases the saltwater solution, a brinicle forms. The brine, which is heavier than the surrounding water, sinks towards the ocean floor and freezes the freshwater it comes in contact with. This allows the brinicle to grow down, creating a finger-like appearance.

Dr Andrew Thurber is one of few scientists to have seen brinicle growth in person. He describes a spectacular scene with downward creeping brinicles. He says they look like upside-down glass cacti. They are delicate and can be broken by the slightest touch.

This 3m deep area on Little Razor Back Island in Antarctica is home to thousands upon thousands of brinicles, often reaching the seafloor. This image shows thousands of amphipods swimming among them. Although they are usually only a few feet from the ice, amphipods can swarm when disturbed, much like a nest full of bees.

However, the fragile ice sheaths conceal a deadly weapon for nearby sea creatures: a brinicle can reach the seafloor and grow from there, potentially catching various creatures at the bottom like starfish and sea urchins, then freezing them.

Thurber says that small brine pools can form in areas where there were once brinicles or under very active ones. These are called black pools of mortality. They can appear reasonably clear, but they may contain the bones of many marine creatures that have accidentally stumbled into them.

Scientists are still in the early stages of studying brinicles. We have video evidence for the development of these mysterious icy fingers.

A brinicle, brine icicle, also known as Ice stalactite, is a hollow tube of ice that grows downwards and contains a plume containing descending brine, formed under developing sea ice.

Salt brine concentrates form when seawater freezes in the polar ocean. This creates a downward flow that is highly dense and cold. It has a lower freezing temperature than the surrounding water. This results in a hollow stalactite or icicle (also known as a brinicle). This plume forms ice around itself when it comes in contact with ocean water.

Saltwater can form ice, which results in significant changes in the compositions of nearby water. Most impurities are removed from water crystals when it freezes. Even seawater ice is relatively fresh relative to the seawater that it was formed.

Sea ice, which is made by forcing out impurities (such as salt or other ions), is porous and sponge-like. It is quite different from solid ice that forms when freshwater freezes.

Seawater freezes, and salt is forced from the pure ice crystal lattice. The surrounding water becomes more acidic as concentrated brine escapes. This reduces the seawater’s freezing temperature and increases its density.

This allows the surrounding brine-rich water to stay liquid and not freeze instantly by lowering its freezing temperature. This layer sinks due to an increase in density. As the super-saline, supercooled water melts away from the pure water, tiny tunnels are made through the brine channel.

This supercooled saline will create additional ice when it reaches seawater that is not frozen below the ice. Water can move from high to low concentrations. The brine has a lower water concentration, so it attracts water from the surrounding area. The brine’s cold temperature causes the water to freeze.

This cold, dense water sinks like a plume just as hot air rises from a fire. As the surrounding water is cooled to below its freezing point by the jet, it begins to accumulate ice at its edges. Now, the brinicle is formed. It looks like a “chimney” made of ice that surrounds a supercooled, super saline flow.

The ice that forms around the down-flowing cold jet creates an insulating layer that prevents cold, saline waters from heating up and diffusing. The ice jacket around the jet is pushed down by the flow.

It’s like an icicle that has been turned inside-out. Instead of cold air freezing liquid water into layers and freezing it, cold water is down-rushing to freeze the surrounding water and allowing it to sink even deeper. It creates more ice, and the brinicle gets longer.

The water depth, growth of sea ice, and surrounding water limit the size of a brinicle. The first-ever video of brinicle formation was taken in 2011. It has been shown that the temperature of the air can affect the salinity of liquid water in the brinicle. The higher the brine concentration, the lower the temperature.

A brinicle looks like a tube of ice that extends from the sea ice layer below. The sea ice above has accumulated through brine channels, resulting in the tube being frozen and saline. The first brinicles can be fragile.

Although the walls are fragile, the constant flow of colder saltwater sustains brinicle growth. It also prevents melting due to the surrounding cold water. The walls get thicker and more stable as ice builds up.

Under the right conditions, a brinicle can reach the seafloor. The supercold brine must flow from the pack ice overhead. It cannot flow very far below the seafloor. The freezing point of the water surrounding the brine plume will not be high enough if it is too salty.

The brinicle will likely break apart under its own weight if the water is too shallow. The strain can cause the brinicle to burst if the icepack is too mobile or the currents are too strong.

A brine pool can be formed if the conditions are right, including favourable ocean floor topography. But unlike brine pools created by cold seeps, brinicle brine pools will be temporary as the brine supply eventually stops.

The most accepted model for their formation has been known since the 1960s. It was first proposed in 1974 by Seelye Martin, an American oceanographer. Producer Kathryn Jeffs, Hugh Miller, and Doug Anderson filmed the formation of a brinicle in 2011. This was for BBC’s Frozen Planet.

Ice finger of death beneath the Antarctic ice