The Zhangye National Geopark is situated in Sunan and Linze provinces in the prefecture-level city of Zhangye, in Gansu, China.

It was formally assigned as “Zhangye National Geopark” by the Ministry of Land and Resources on June 16, 2016, after it has reached the on-site acceptance test.

Known for its colourful rock formations, it has been chosen by Chinese media outlets as one of the most beautiful landforms and tourist attractions in China.

Where are The Rainbow Mountains Located

The parks location is in the northern foothills of the Qilian Mountains, in Linze and Sunan, under the prefecture-level city of Zhangye, Gansu province. The main sections of Danxia landform are in Kangle and Baiyin towns.

It is the most developed, popular and most visited portion of the park. A second scenic region, Binggou, found on the north bank of Liyuan River, was formally inaugurated on August 3 2014. 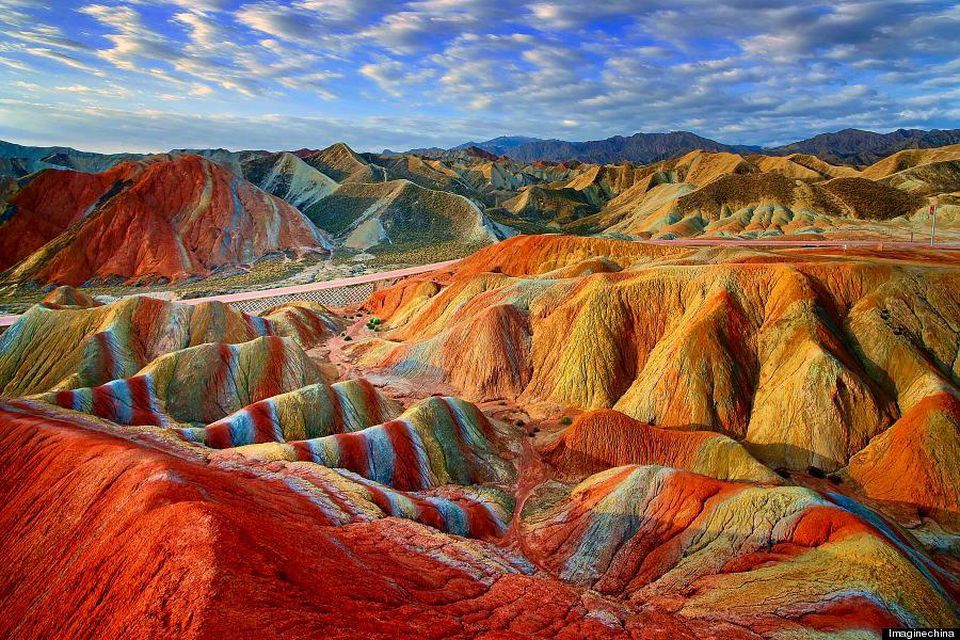 The Rainbow Mountains – A Dreamy Landscape

Zhangye Danxia is recognised for the unusual colours of the rocks, which are smooth, sharp, and many metres tall.

They are the result of sediments of sandstone and other minerals that appeared over 24 million years.

The result (comparable to a layer cake), was tilted by the very tectonic plates responsible for producing parts of the Himalayan mountains.

The Most Beautiful Chinese Tourist Attraction

In 2005, Zhangye Danxia was chosen by a panel of reporters from 34 major media outlets as China’s most beautiful Danxia landform areas and regions.

In 2009, Chinese National Geography journal chose Zhangye Danxia as one of China’s “six most beautiful landforms”.

The site has grown to become a top tourist attraction for Zhangye. A series of boardwalks and passage roads have been built to help tourists and visitors explore the rock formations.

In 2014, 100 million yuan was spent on upgrading the facilities in the Binggou area.

Zhangye Danxia is added as a natural wonder in the video game Sid Meier’s Civilization VI. It was featured in the Rise and Fall expansion. 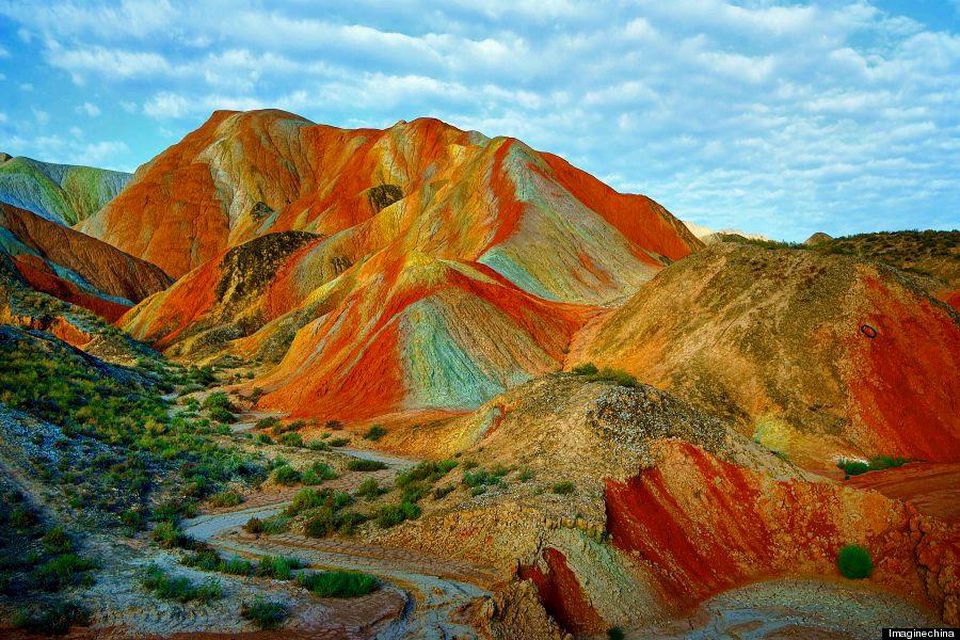 The Rainbow Mountains of China in the Zhangye Danxia Landform Geological Park are a geological wonder of the world.

These famous Chinese mountains are recognised for their mysterious colours that mimic a rainbow painted over rolling mountains’ peaks.

This is just one instance where geology gets our attention and begs the question: What causes the Rainbow Mountains to be coloured the way they are?

Here I will inform you of the diagenetic and mineralogical formations and processes that make up the reds, yellows, greens, and blues.

The site was titled a UNESCO World Heritage Site in 2009 and is the target for many Chinese and international tourists.

How Did The Rainbow Mountains Form?

The Rainbow Mountains are cretaceous sandstones and siltstones collected in China before the Himalayan Mountains were created. 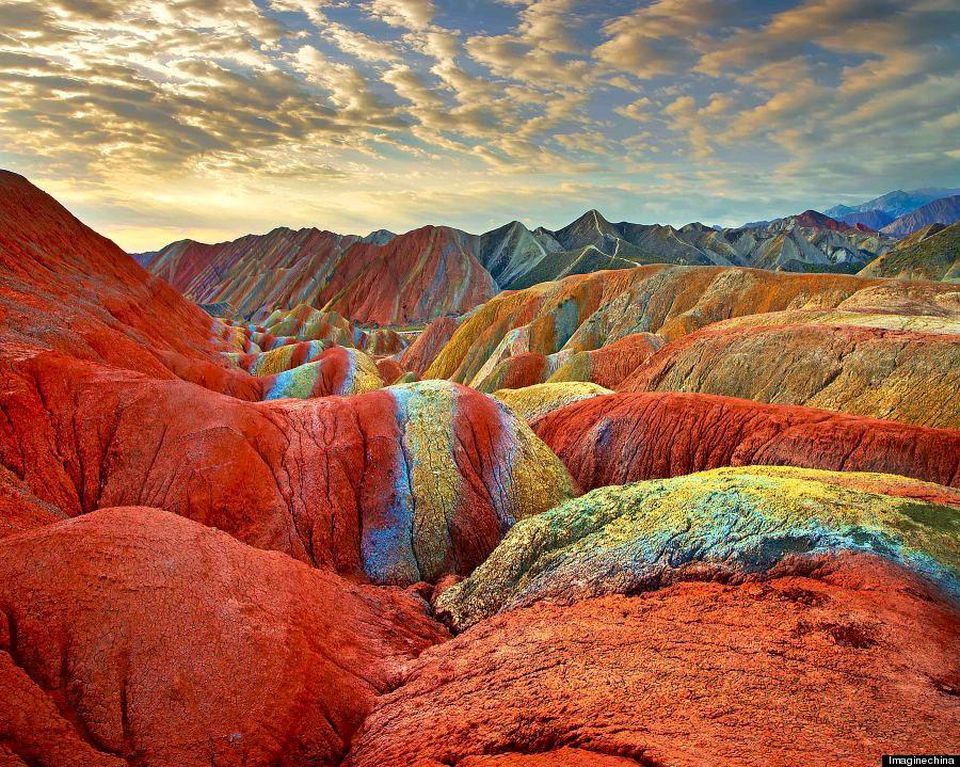 The sand and silt were placed with iron and trace minerals that contributed to the vital ingredient to make the colours we see now.

Once a layered horizontal & flat stratigraphy was interrupted by the Indian Plate smashing into the Eurasian Plate around 55 million years ago.

Much like if two cars get in a wreck, and the fenders fold and crack, a similar process folded what was once flat sandstones into the Rainbow Mountains we see now.

This process uplifted peaks and exposed sedimentary rocks that were unless hidden well below the earth’s surface.

Weathering and erosion destroyed the overlying layers of continental siliciclastic rocks and exposed underneath formations with different mineralogy and chemistry.

This creates the striking variation in colours seen over the Rainbow Mountains.

Now that you know how the Rainbow Mountains developed, we will discuss how they got the colour we see.

Precipitated groundwater moves within the sandstone grains and deposits trace minerals in among the grains.

This deposit can build up to a point where there is no longer a pore space separating the individual grains, bonding them in place.

This process is what gives the trace minerals discussed below. It presents the otherworldly colouring of sandstones around the world.

Unlike the Fountain Formation, the primary colour is a deep red sandstone that outcrops in the Flatirons, Garden of the Gods all in Colorado, and the Red Rocks Park.

The red colouring is because of iron oxide covering and cementation known as hematite (Fe2O3), amid the sandstone grains.

This is the same identical process when a piece of metal is left out in the rain and creates a red layer of rust around the outside.

The Rainbow Mountains are distinguished mainly by this iron oxide staining of its sandstone Danxia formation.

Most of the time, iron oxides bestow a dark red pigment. Nevertheless, there are situations where oxides form various colours.

If there is iron sulfide present, you will see a metallic yellow colour given by the sulfur. While green colouring is usually due to chlorite or iron silicate clays.

These are just some instances of how sandstones can be modified in colour during diagenesis.

Why are the Rainbow Mountains Rainbow?

The reason we observe the rainbow colouration in the stratigraphic layers and deposited sediments of the Ausangate mountain is mostly due to weathering and mineralogy.

The Colima Volcano – Most Dangerous Volcano In Mexico