The Blue Footed Booby – When Your Feet Are Blue 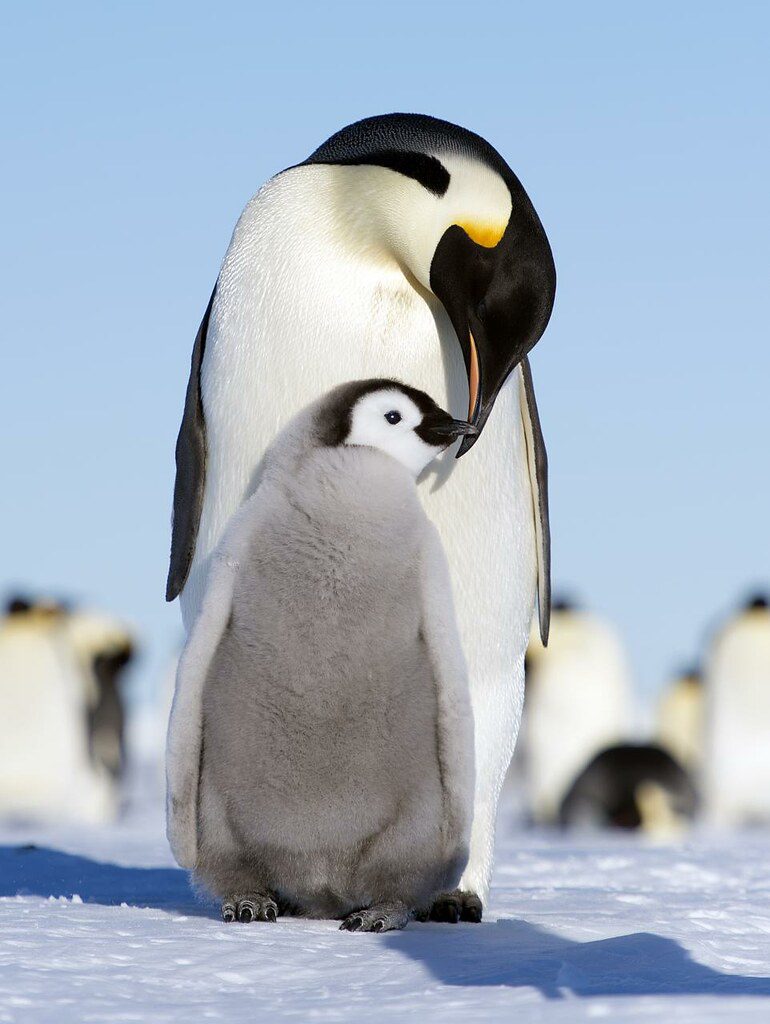 Introduction To The Emperor Penguin

The emperor penguin  (  Aptenodytes fosteri ) is the tallest and most imposing of all penguin species. It is an endemic species to Antarctica. Both the male and female have similar plumage. They can reach 100 cm (39in) in length and weigh between 22 and 45 kg (49 and 99 lb). The black feathers on the head and back are sharply defined by the pale-yellow breast, white belly and bright-yellow ears.

It is like all penguins, it is flightless with a sleek body and wings that are stiffened and made into flippers to move in a marine environment. It eats mainly fish but it also eats cephalopods and crustaceans like krill.

The species can stay submerged for around 20 minutes while hunting and can dive to a depth of 535 m (1.755 ft). Several adaptations facilitate this: unusually-structured haemoglobin, which allows it to function at low oxygen levels, solid bone to reduce barotrauma and the ability to lower its metabolism and shut off non-essential organ functions.

Emperor penguins are the only penguin species to breed in Antarctic winter. They can travel 50-120 km (31 to 75 mi) across the ice to reach breeding colonies that can house up to several thousand. One egg is laid by the female.

The male incubates the egg for two months, while the female returns to the sea to feed. Parents then take turns caring for the chicks in the colony and foraging at sea. While the average lifespan in wild animals is 20 years, observations indicate that some individuals can live up to 50 years. 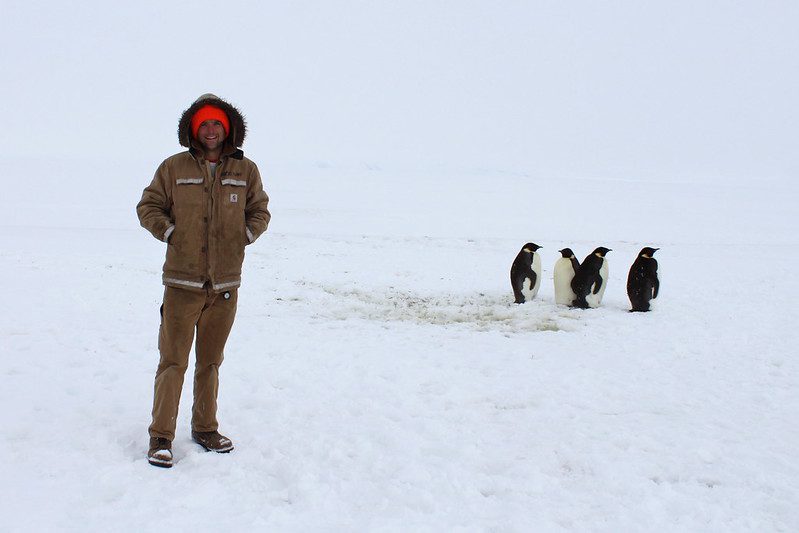 Adult emperor penguins measure 110-120cm (43-47in) in length including tail and bill. The average weight of emperor penguins is 22.7 to 45.4 kilograms (50 to 100 lb). It varies according to sex, with males being heavier than females. After the larger varieties, it is the fifth-heaviest of all the bird species.

It also changes in weight depending on the season. Both male and female penguins can lose significant mass during hatchling raising and incubating eggs. The extreme Antarctic winter cold can cause severe injury to emperor penguins. He does not eat during this period. While they wait for the eggs to hatch, most male emperors will gain around 12 kg (26lb).

As with all penguin species, the emperor penguins have sleek bodies that minimize drag when swimming and wings that resemble stiff, flat flippers. To prevent prey from fleeing when they are caught, the tongue has rear-facing barbs. Both males and females have similar sizes and colours. 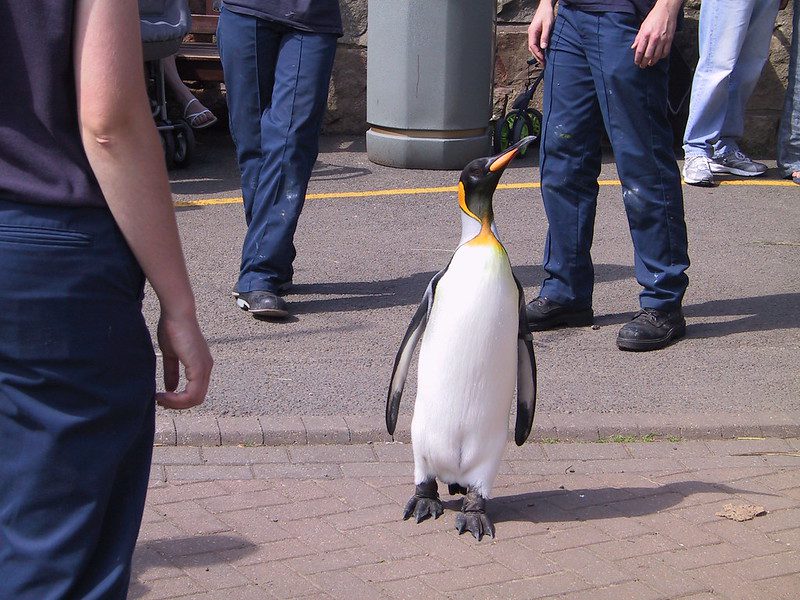 The adult’s dorsal feathers are deep black and cover the head, neck, throat, back, dorsal portion of the flippers, tail, and chin. The dark plumage stands out from the lighter-coloured plumage elsewhere. The belly and underparts are white. They turn pale yellow in the upper part of the breast.

The ear patches are bright yellow. The 8 cm (3in) long bill’s upper mandible is black. The lower mandible may be pink, orange, or lilac. The bill of juvenile penguins is black except for the auricular spots, chin, and throat. The heads and masks of Emperor penguin chicks are usually covered in silver-grey down. 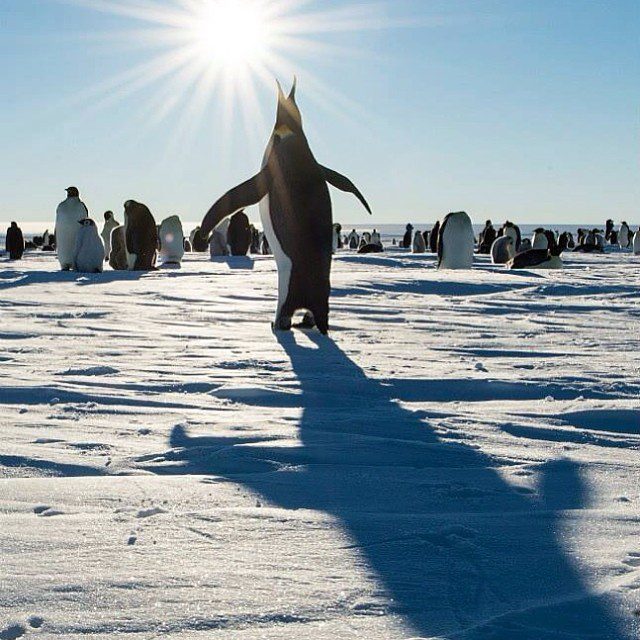 One chick was observed with all-white plumage in 2001. However, it was not considered an albino because it didn’t have pink eyes. After hatching, chicks are approximately 315g (11 oz) and fledge when their adult weight reaches about 50%.

The emperor penguin’s plumage is dark from November to February (the Antarctic winter), before it turns brown again. Moulting takes only 34 days in this species, compared to other birds. To reduce heat loss, the Emperor penguin feathers emerge after they have reached a third of their length. The old feathers are then pushed out by the new feathers, which completes their growth.

An adult emperor penguin’s average survival rate was 95.1% with a life expectancy of 19.9years. According to the same researchers, 1% of emperor penguins that are hatched could live to 50 years. Only 19% of chicks live beyond their first year. Thus, 80% of the emperor penguins are adults aged five and over. 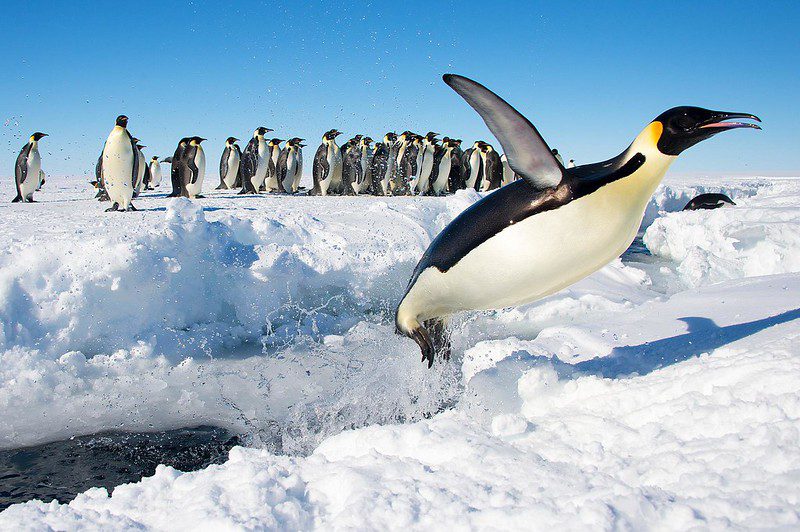 How Do Emperor Penguin’s Adapt To The Extreme Cold?

Penguins use physiological adaptations and cooperative behaviour to cope with extreme environments, such as wind chills that can reach -76degF.

They gather together to keep warm and escape the wind. The group’s warm and protected interior is where the penguins move in turn. Once the penguin has warmed up, it will begin to move towards the perimeter of the group to provide protection against the cold elements.

Emperor penguins spend their winters on open ice and even breed during this cold season. The females only lay one egg, and then they quickly leave it behind. The extended hunting trip they undertake can last up to two months. 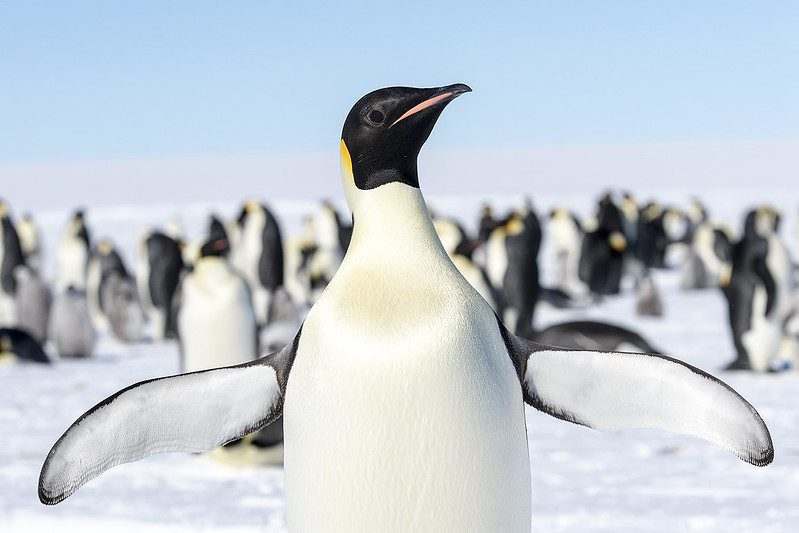 The extent of the ice cover may mean that females will need to travel 50 miles to reach the open ocean. They will then be able to eat fish, squid and krill depending on where they are located. Emperor penguins can dive up to 1,850 feet at sea–deeper than any other bird and stay below for longer than 20 minutes.

Emperor penguins are found in colonies spread across the Antarctic continent. The size of colonies can range from just a few hundred to more than 20,000. The fast-ice between islands and grounded icebergs is where most colonies are found.

Proposed climate change is expected to cause a slow decline in the population of Emperor penguins over the next three decades. Researchers are currently studying the effects of climate change on species and the potential impact of future environmental changes. 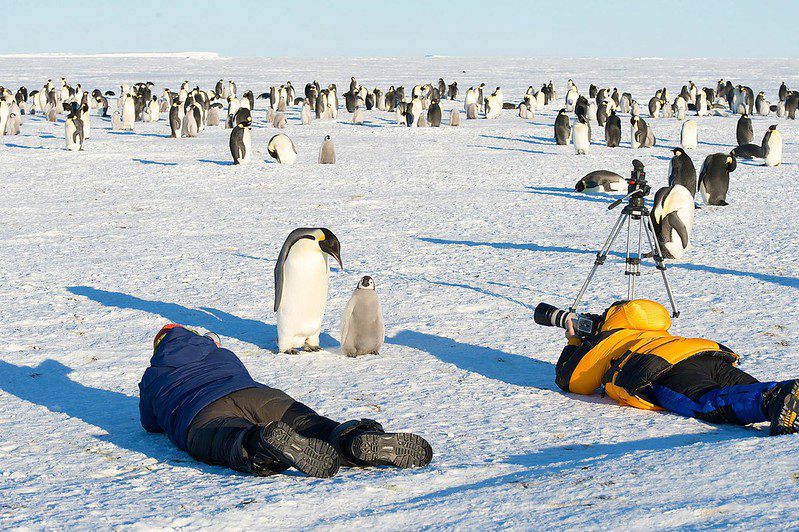 The eggs are kept warm by male emperors, but they don’t sit on them like other birds. The brood pouch, which is a feathered covering made of feathers that covers the eggs and keeps them warm from the elements, is used by male emperors to protect them. During these two months of babysitting, the males are deprived of food and left to the Antarctic elements.

Female penguins bring back a full stomach to their breeding site and eat it for their chicks. While they are doing their duty, male emperors head out to sea in search of food.

Mothers take care of their chicks and provide warmth with their brood pouches. A chick can die within minutes if it is not protected by a warm cocoon. The Antarctic summer begins in December. This is when the pack ice starts to melt and open water forms near the breeding site. Young emperor penguins can swim and fish by themselves. 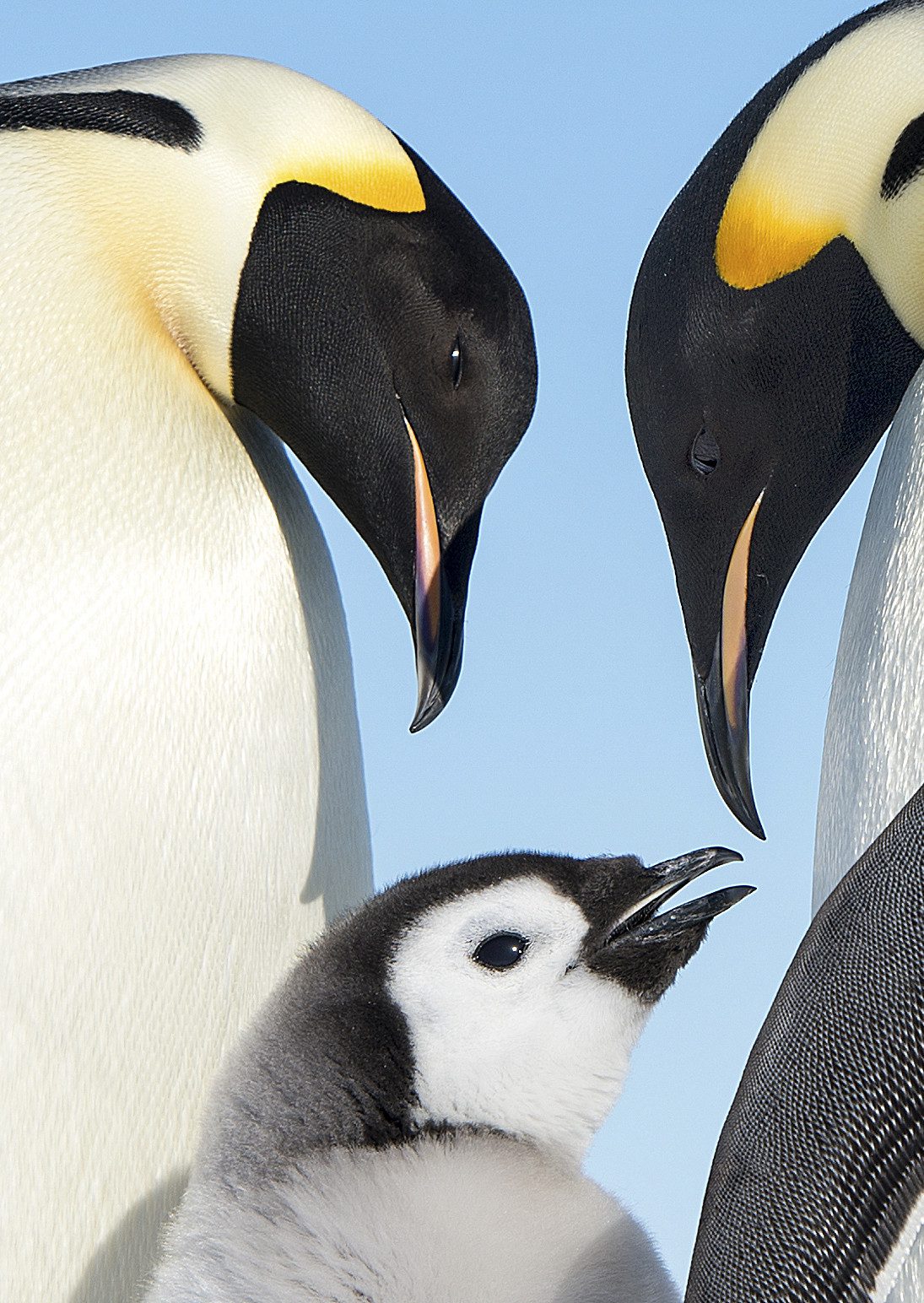 Emperor penguins are exquisite divers! They can be found at depths between 150 and 250 metres. However, their deepest dive was 565 metres. Dives last on average between 3 and 6 minutes, but 22 minutes was the longest recorded dive.

The Southern Ocean’s top food chain includes Emperor penguins. Their menu changes according to the season. Certain prey items are more valuable than others. The Antarctic silverfish Pleuragramma Antarcticum is one of the most commonly eaten prey species. They also eat other fish like Antarctic krill and some species of squid. Prey items are usually small. Because they are extremely cold, it is easier to bring food to body temperature.

An adult penguin eats 2-3 kg per day. They can consume up to 6 kg per day if they are trying to gain weight before the moult or the beginning of the breeding season.

Before they can return to their colony, breeding adults must eat enough. The colonies are far from the fishery so they need to feed their chicks. Each parent should provide 42kg of food for a chick. 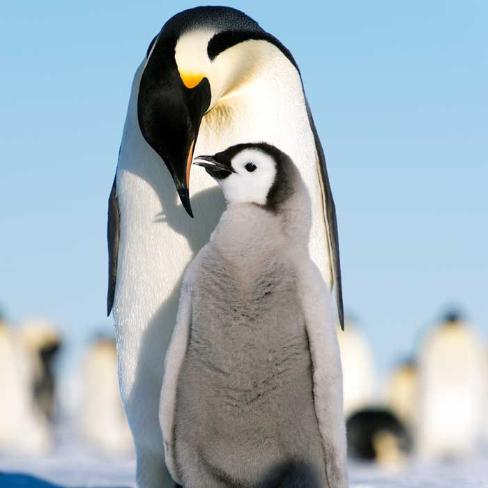 The Predators of Emperor Penguin

Other birds, such as the southern giant petrel and the south polar skua prey on Emperor penguin chicks. Orcas and leopard seals have been known to feed on adult penguins. 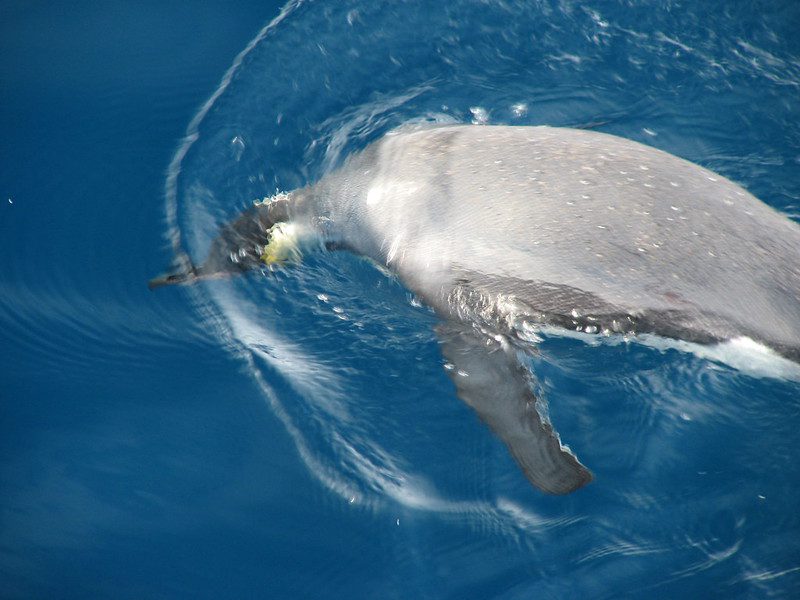 Can an emperor penguin become a pet?

How Long do Emperor Penguins Live For?

In the wild, Emperor penguins can live up to 15 years.

How Many Emperor Penguins can you Find Today?

Surveys of satellite images dating back to 2009 revealed 46 colonies with 238,000 breeding pairs. This suggests that there are 595,000 individual Emperor penguins. Seven additional colonies have been found since then. 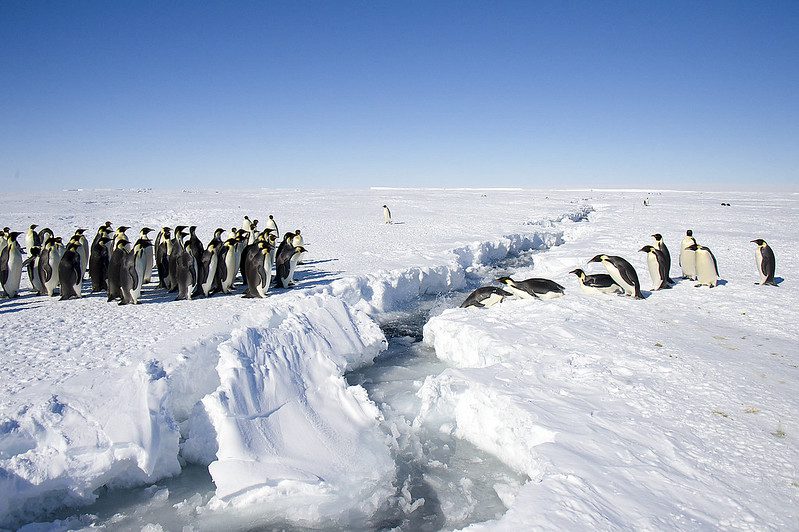 Why Is It Called the Emperor Penguin?

How Long do Emperor Penguins Live?