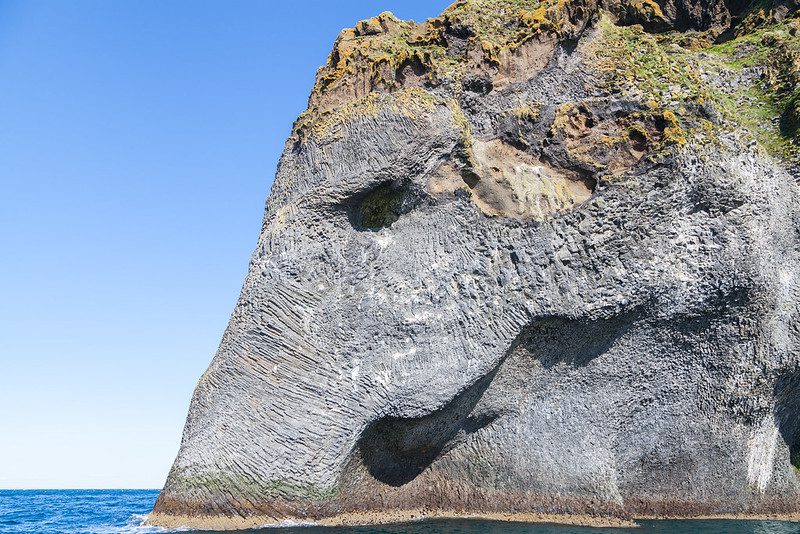 THE ELEPHANT-SHAPED ROCK ON WESTMAN ISLANDS

A small archipelago off the southern coast of Iceland. Heimaey is the largest volcanic island and features many unusual rock formations.

The island’s most notable rock formation is located along its western coast. It looks like an elephant head and has its trunk under the Atlantic Ocean.

The Elephant Rock is a basalt stone found in Iceland’s Westman Islands (Vestmannaeyjar). We believe that the natural rock formation is a mythical petrified sea elephant, despite being crazy. Scientists believe the rock was formed by a volcanic eruption.

The incredible rock formation Iceland’s Elephant Rock can be found in Vestmannaeyjar or the Westman Islands. This isn’t one of those things you have to look hard enough to see, but it’s one of those sights that will leave you stunned in a fraction of a second. It is obvious that you are looking at a petrified elephant.

HOW DID THE ELEPHANT ROCK FORM?

It is difficult to believe that this huge rock was created naturally, especially after being confronted with a giant elephant. However, we should believe that there is no record of an elephant ever walking in Iceland.

The Westman Islands were formed by a series of volcanic eruptions that occurred below sea level. Because the island lies at the boundary between two continental plates, this is quite common in Iceland. The result is that there are a lot more earthquakes and eruptions than usual, and this is just everyday life for many locals.

Heimaey is the largest of the Westman Islands and the only inhabited island in the cluster. A volcano is located right in the middle of Heimaey. Eldfell is the name of the volcano. It is very active and causes trouble for locals.

In 1973, Eldfell erupted almost immediately, causing lava flow to larger areas of Heimaey. The eruption caused the evacuation of the islands and the abandonment of the home island. This was one of the most significant events of the late 19th century, and it changed the lives of many Islanders.

Many believe the Elephant Rock formed from this eruption, which significantly increased the island’s size.

The fact that the elephant actually formed in the 1973 eruption would mean it was relatively young, but it is still a symbol for the Westman Islands community. You won’t want to miss this basalt rock giant, which hides its trunk deep in the Atlantic Sea.

WHERE IS ELEPHANT ROCK LOCATED

The Westman Islands is an archipelago that consists of 15 islands just off the South Coast of Iceland. One of the islands, Heimaey, is the only one that is inhabited. It is the largest island in the cluster. The Elephants Rock rises above Heimaey, surrounded by smaller islands and sea cliffs.

WHAT HAPPENED TO THE ELEPHANT ROCK IN 2012?

Elephant Rock was eroded by the highest tides over millions of years into a flowerpot shape. That is until on March 14th, when the rock shattered down its middle and approximately 100 to 200 tonnes of rock fell to the ocean floor onto the nearby Sea Cave

HOW DO YOU GET TO THE ELEPHANT ROCK

You will need to first travel to the Westman Islands to reach Elephant Rock. You can do this by either flying or boat.

To choose the boat option, you’ll need to know from which port Herjolfur (the ship) departs on that particular date. Herjolfur will most likely depart from Landeyjarhofn in summer, which is close to Seljalandsfoss’ waterfall.

However, if you plan to visit during winter or when the weather is more severe the boat may depart from Thorlakshofn. The boat ride from Thorlakshofn will take about 3 hours, while it takes 30 minutes to leave Landeyjarhofn.

No matter what your choice, once you arrive in Westman Islands, you’ll need to book either a Rib Safari tour of the island or a boat trip around it. You can’t see the Elephant Rock by walking around the island. You have to go by boat. The view is worth it!

WHAT TO DO AROUND ELEPHANT ROCK

WHERE TO EAT NEAR THE ELEPHANT ROCK

WHERE TO STAY NEAR ELEPHANT ROCK

There are many camping options on Westman Island. You can even go camping.

Thorsvollur Campground has amazing facilities, including running water, toilets and washing machines, as well as well-equipped cooking stations. Electricity for campers is available.

Herjolfsdalur Campground is a beautiful spot in the quiet Herjolfsdalur Valley. There are toilets, wash machines, dryers, laundry machines, and showers. You can also use electricity, and there is a playground for children.

Clamping/Small Cabins is an excellent option for anyone who wants to connect with nature without sacrificing comfort. Two housing options are available: one is a large barrel, the other an A-shaped cabin. They are right next to Herjolfurdalur Valley’s camping ground.