They have very broad abdomens when well-fed and display a tremendous colour-range from off-white and grey through tan, brown to virtually black. They have an unevenly leaf-shaped pattern on the top of their abdomen with an intricate outline that is darker than the encompassing area.

There may also be some whitish spots or one or more lines. The spiders’ cephalothoraxes leg, (heads) and proximal (closer to the body) sections are usually darker, frequently reddish or reddish-brown.

They can switch their colour with each moult to better match the environment upon which they rest during the day. This is called a natural camouflage.

The spiders are well-known for the often large and elaborate webs which they weave at nighttime. They are generally nocturnal feeders, leaning head down in their webs waiting to capture flying insects.

They develop their sticky rounded orb webs near lights and amidst trees where insects are likely to pass. During the daytime, the Australian spider will often rest someplace near the web, generally under a leaf or twig, or in the bark or rock crevice.

They are typically found around human habitation so may be spotted resting under leaves and in similar positions. When disturbed or molested, they will retreat towards this rest area.

Though, under imminent danger, the spider will fall to the ground and “play dead”. Occasionally individual spiders will persist on the web during the day, possibly when the prey has not been taken for a while, but this makes them more exposed to predation by birds.

Their spider bite or sting is not dangerous to humans but may produce mild, local pain, redness, and irregularly swelling for a duration of 30 minutes up to three to four hours.
The female is bigger than the male, having a 20 – 25 mm body length compared with 15 – 17 mm for the male orb-weaving spiders.

Females may also be recognised by a needle-like epigynum (outside genital structure of female spiders) pointing in the direction of the spinnerets (a silk-spinning organ of a spider).

The regularly seen Garden Orb Weavers are stout, reddish-brown or grey spiders including a leaf-shaped pattern on their fat, roughly triangular abdomens, which also have two prominent humps towards the front. They sometimes have a dorsal stripe which may be white or brown trimmed with white.

Orb weaving spiders create suspended, sticky, wheel-shaped orb webs. Webs are located in openings between trees and shrubs or structures where insects are expected to fly.

Usually, the spider builds its web in the evenings and takes it down again at dawn. The spider dozes head-down in the centre of the web, pausing for prey.

Garden Orb Weaving Spiders build wheel-shaped webs in breaks between trees and shrubs where insects are expected to fly. When an insect travels into the web, the spider senses the shake or vibration, races out from the web centre and quickly wraps the victim in silk, turning it with its shorter middle legs.

When the prey is bound, the orb-weaver delivers a bite and sits back to let the deadly venom to do its job. Once all movement has ended, the spider takes the meal to the centre of the web and consumes it or attaches it up for later.

When food is abundant, these spiders will free large prey rather than risk a fight that may destroy their web. Flying insects including flies, beetles and bugs (including big prey like cicadas), are popular prey. 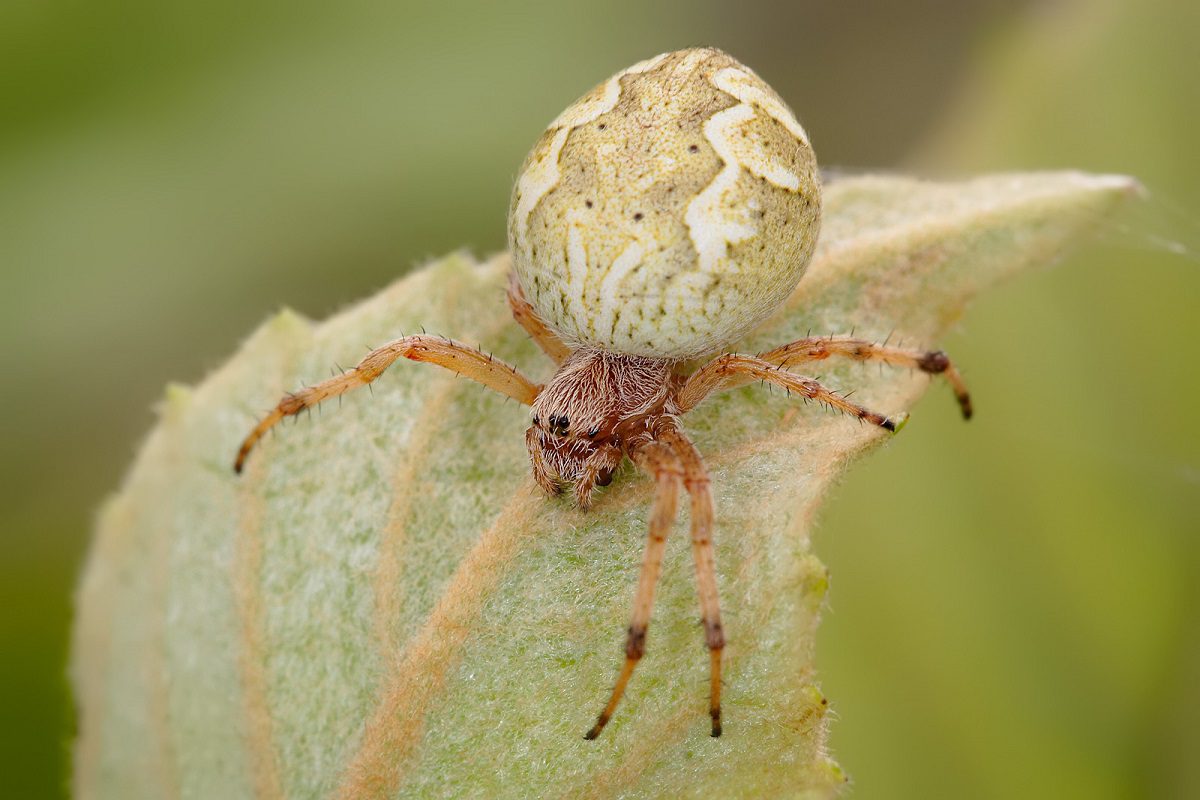 Butterflies and day-active moths are sometimes taken but are partially shielded from web capture by the presence of scales on their wings. Those scales can be shed and this may enable the insect to fight free of the sticky web.

During the day, the spider sleeps on nearby foliage with its legs pulled under the body.

How long do orb-weaving spiders live?

The typical lifespan of a female Garden Orb Weaver is approximately twelve months. A female lays her eggs in late summertime to autumn. The eggs are encased in a fleecy silken cocoon and fastened to foliage.

Throughout autumn, the spiderlings hatch and scatter by ballooning (floating on the wind using small silk strands as “balloons”), and create their own tiny orb webs amongst vegetation and wait out the wintertime.

During spring the spiderlings begin to develop more swiftly, and they mature in summer. The cycle then starts anew, the adult females mate and deposit their eggs. Adult females typically die off in autumn – early winter.

What Are The Predators of this Predator?

Birds, including honeyeaters, are typical predators of these spiders.

Venom toxicity – the bite or sting of Orb-Weaving Spiders is of low danger (not toxic) to people. They are a non-aggressive collection of spiders and seldom bite. Orb weavers are hesitant to bite.

Should I kill an orb-weaver spider?

No, you shouldn’t kill an orb-weaving spider. They are relatively harmless to humans and are reluctant to bite. If you must relocate them, use a cup, gently place it over the spider, put a piece of cardboard over the cup, and set it free in a tree away from where you don’t want it.

Orbweaver spiders spin some grand webs and are not a danger to humans. While their venom is toxic to little insects, it simply isn’t going to do much more than create a red, irritated area that will feel like a bee bite for an hour or two before it passes away.

Sign Up to receive the latest articles on TimsWWW straight to your email inbox.
Don’t miss out on our nature-loving articles!

The Huntsmen Spider & It’s Bite – All Your Questions Answered

Funny 😹 Cats And 🐶 Dogs Situations – Try Not To Laugh 😂