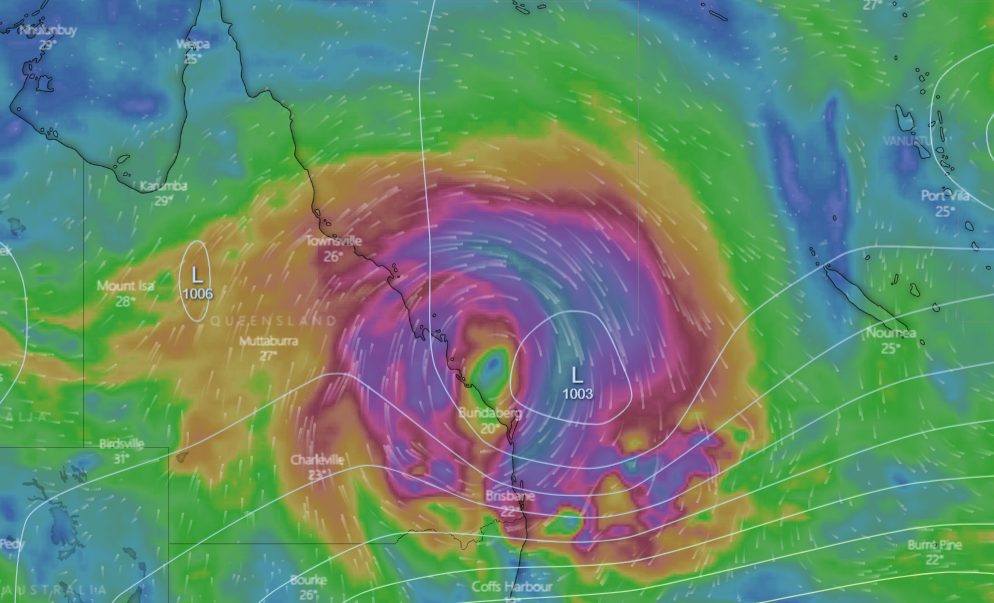 A strong hybrid low & strong associated trough is developing in the southern coral sea, it is expected to intensify as it moves toward the southern Queensland coastline.

Cyclonic conditions are expected to develop along the southern Queensland exposed coastline from very late Sunday(13/12/2020) evening and through Monday. Intense rainfall that may lead to flash flooding, storm force winds over 80km p/h, and exceptionally large tides and waves. Some coastal inundation and beach erosion may occur.

Intense to flooding rainfall, destructive and cyclonic winds over 80km per hour near the coastline and in excess of 110km per hour in the Moreton Bay areas, storm surges, and 5-7 metre waves are expected.

This is a significant weather system, please take precautions. This weather forecast will be updated as to the progress of the weather system in the coming days.

Localised and major flooding is possible. Please start preparing, as this is a significant weather system.

Weather Forecast for the rest of Sunday and Monday

Weather Forecast for the rest of Sunday and Monday

Don’t be fooled by the relatively light rain. Later this evening and into tomorrow(Monday) conditions will progressively get worse. Heavy rainfall is likely to develop from the Sunshine Coast to the Gold Coast along the coast and adjacent inland areas along with the eastern ranges.
Squally southeasterly winds will develop along with this intense rainfall. Localised to moderate flooding is possible and rainfall could total more than 300mm + in some places.

Some of the heavier rainfall areas may have embedded thunderstorms with strong winds and torrential rain. Waterspouts are possible on the coast and could come ashore with destructive winds.

Monday is likely to be similar, but the rain will ease off late Monday evening or very early Tuesday morning. Below is a computer modelling from windy.com of possible areas of rainfall.

It is likely that small embedded lows and eddies will develop along the coastal trough bringing strong winds and heavy rainfall over sections of the coastal strip. Most areas will see at least 100mm+.

Also reports of severe flooding in far northern NSW:
From BOM: INTENSE RAINFALL which may lead to dangerous and life-threatening flash flooding is occurring about the New South Wales border ranges around Springbrook and is expected to continue over the next 1-2 hours 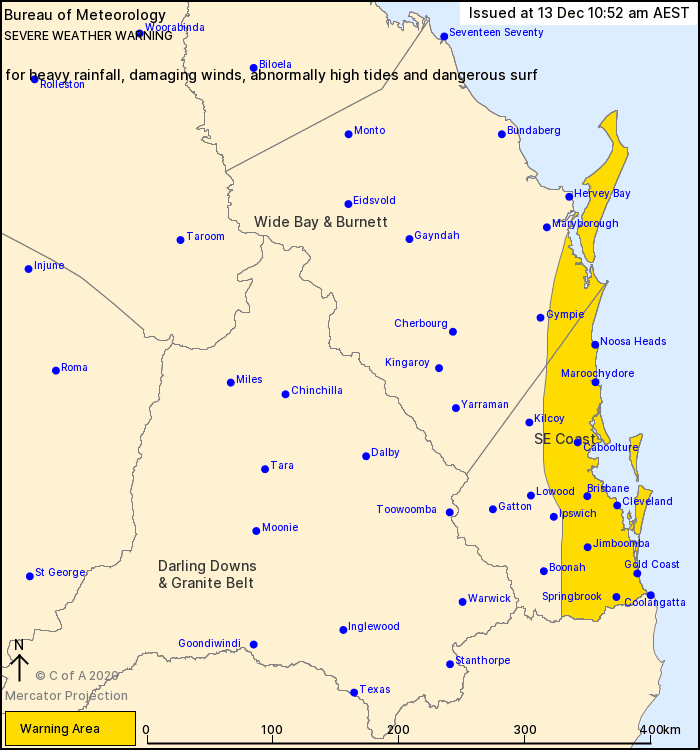 The latest models indicate an area from about the Sunshine Coast through to Brisbane & the Gold Coast down to Coffs Harbour, Kempsey & Taree may be affected.

We should start to see showers increasing before the severe weather develops, heavy showers and possible onshore thunderstorms will start to develop in the moist southeast onshore flow, increasing to rain areas, and cyclonic conditions from Sunday evening onwards.

Please ensure all marine vessels are secured, and coastal communities especially along the coast make the necessary precautions such as removing objects for yards and businesses.

Official Severe Weather Warning for the Bureau of Meteorology(BOM)

SEVERE WEATHER CONTINUING OVER SOUTHEAST QUEENSLAND DURING TODAY INTO TUESDAY

Periods of heavy rain that may lead to flash flooding are expected to develop in the warning area south of about Noosa. Rainfall will increase through this morning, with some intense falls expected again about the Gold Coast Hinterland and Border Ranges, and possible about the Sunshine Coast and Hinterland. Six-hourly rainfall totals of 100mm to 150mm are likely and locally heavier falls of around 200 to 300mm will be possible.

Abnormally high tides exceeding the highest tide of the year are expected on the morning high tides for the next few days. Dangerous surf conditions are also expected to continue about exposed beaches today and in combination with the abnormally high tides could lead to significant coastal erosion about areas exposed to wave action.

Damaging winds with gusts of around 90km/h are expected about exposed coastal and elevated locations in the warning area.

A Minor Flood Warning is current for the Logan and Albert Rivers. A Flood Watch is current for catchments from Fraser Island to the Queensland/New South Wales border.

Observed rainfall totals from 9 am Sunday to 5 am Monday:

This Flood Watch provides early advice of possible flooding within the specified catchments.

River level rises and minor flooding is likely across parts of the Flood Watch area from late Sunday and into Monday.

A trough is expected to deepen off the southeast Queensland coast during Sunday producing showers, thunderstorms and rain areas over the Flood Watch area. The heaviest falls are expected to begin later today and are forecast to continue into Monday, particularly along the coast.

A Severe Weather Warning for heavy rainfall from Sunday remains current for the Flood Watch area.

River level rises above the minor flood level are likely from Sunday, with some areas expected to record renewed river level rises. Localised flooding and disruption to transport routes is also possible throughout the Flood Watch area.

A Flood Warning has been issued for the Albert and Logan Rivers.

Catchments most likely to be affected include:

Queensland Fire and Emergency Services advises that people should:
* Move your car under cover or away from trees.
* Secure loose outdoor items.
* Never drive, walk or ride through flood waters. If it’s flooded, forget it.
* Seek shelter, preferably indoors and never under trees.
* Avoid using the telephone during a thunderstorm.
* Beware of fallen trees and powerlines.
* For emergency assistance contact the SES on 132 500.

Sign up to received regular emails about new articles that might interest you.
Your personal information is protected by law and will not be disclosed.