What Is The Giant’s Causeway?

A natural landmark and tourist destination in Ireland.

The Giant’s Causeway in Northern Ireland is an area of approximately 40,000 basalt columns interlocking in one place, which is the result of an old volcanic fissure eruption. It is situated in County Antrim, on the north coast of Northern Ireland. It is approximately three miles (5km) northeast of Bushmills.

In 1986, UNESCO declared it a World Heritage Site. The Department of the Environment for Northern Ireland made it a national nature preserve in 1987. According to a 2005 Radio Times poll, the Giant’s Causeway was ranked fourth in Britain’s natural wonders. Most of the columns are hexagonal. However, there are some that are rectangular. In places, the solidified volcanic lava is 28m (92 ft).

The National Trust manages large swathes of the Giant’s Causeway Coast World Heritage Site and a lot of its surroundings. It is one of the most visited tourist attractions in Northern Ireland. In 2019, it was visited by over 99,000 people.

Around 50-60 million years ago, Antrim was the scene of intense volcanic activity when fluid molten basalt pushed through chalk beds to create an extensive volcanic plateau. The lava began to cool and contract. Horizontal contraction occurred in the same way as drying mud. The cracks spread down as the mass cools, leaving behind pillar-like structures. These structures also split horizontally into “biscuits”. Horizontal fractures can often result in convex bottoms and concave upper faces.

These are what is known as “ball-and-socket” joints. The mass of the columns was primarily determined by the speed at which lava cooled. The extensive fracture network created the distinctive columns seen today. The basalts were initially part of a great volcanic plateau called the Thulean Plateau, which developed during the Paleocene.

Legend of The Giant’s Causeway

Legend has it that the columns are remnants of a causeway constructed by a giant. According to legend, Fionn MacCool (Irish giant Fionn MacCool) was challenged by Benandonner, a Scottish giant. Fionn accepted the challenge and built the causeway across North Channel to allow the giants to meet.

In one version of the story, Fionn defeats Benandonner. In another version, Fionn hides from Benandonner when he realises that his foe is much bigger than he is. Sadhbh, Fionn’s wife, disguises Fionn as an infant and places him in a cradle. Benandonner is shocked to see the baby’s size and concludes that Fionn must be a giant among giants. In fright, Benandonner flees to Scotland and destroys the causeway behind him, so Fionn could not chase him down.

Fionn Mac Cumhaill, in Irish mythology, is not a giant but a hero with superhuman abilities. This is contrary to what this particular legend might suggest. Fairy and Folk Tales of the Irish Peasantry (1888) notes that over time “the pagan gods of Ireland grew smaller and less popular until they transformed into the fairies, while the pagan heroes grew larger and more powerful until they became the giants.” Clochan na bhFomhoraigh, or Clochan na bhFomhorach in Irish, means “stepping stones of the Fomhoraigh”.

Fomhoraigh, a race of supernatural beings from Irish mythology, was once described as giants. They may have been originally part of an earlier pre-Christian pantheon.

In 1692, the Bishop of Derry visited this site. The Royal Society was informed of the existence of the causeway in 1692 by Sir Richard Bulkeley (a fellow at Trinity College, Dublin) presenting a paper to them. International attention was given to the Giant’s Causeway by Susanna Drury, a Dublin artist.

In 1739, she made watercolour paintings. In 1765, Drury received the first award from the Royal Society. Nicolas Desmarest, a French geologist, suggested that these structures could be volcanic.

Tourists first discovered the site in 1921, especially after the opening of the Giant’s Causeway Tramway. Only after the National Trust assumed its care in the 1960s were remnants of commercialism gone. The basalt columns are located at the beach’s edge, about a half-mile from the entrance.

Between 2000 and 2012, there was no permanent visitor’s centre on the causeway. The previous building was built in 1986 and was destroyed in 2000. However, preliminary approval was granted by Arlene Foster, then Environment Minister, in 2007. Public funding was suspended due to a conflict of interest between the DUP and the private developer. The new visitor’s centre opened in 2012.

The inclusion of Young-Earth Creationist material in some exhibits at the visitor centre was controversial. However, the Caleb Foundation chairman, who welcomed the inclusions, said that they were welcome. The National Trust stated that the inclusions made up only a small portion of the exhibition and that it “fully supports the scientific explanation of the creation of the stones 60 million years ago.” 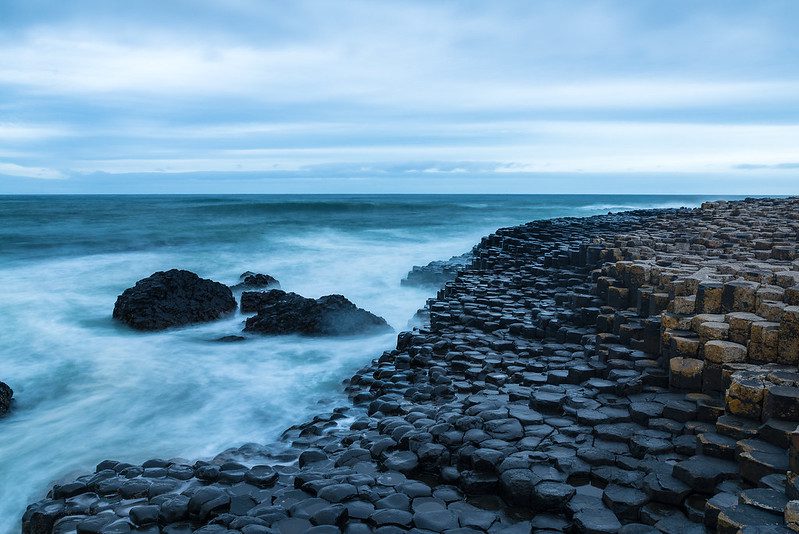 Many structures found in the area have been exposed to many million years of weathering and resemble objects such as the Organ and Giant’s Boot structures. You will also find reddish-coloured, weathered low columns called Giant’s Eyes. These were created by the displacement of basalt boulders.

This area is home to many seabirds, including the fulmar, cormorant and shag. The weathered rock formations also house a variety of plants, including sea spleenwort and vernal squill.

A stromatolite colony was reportedly discovered at the Giant’s Causeway in October 2011 – an unusual discovery, as stromatolites are more typically found in warmer waters with higher saline content than that found at the causeway.

Basalt columns are a common volcanic feature. They can be found on many scales because they are smaller due to faster cooling. 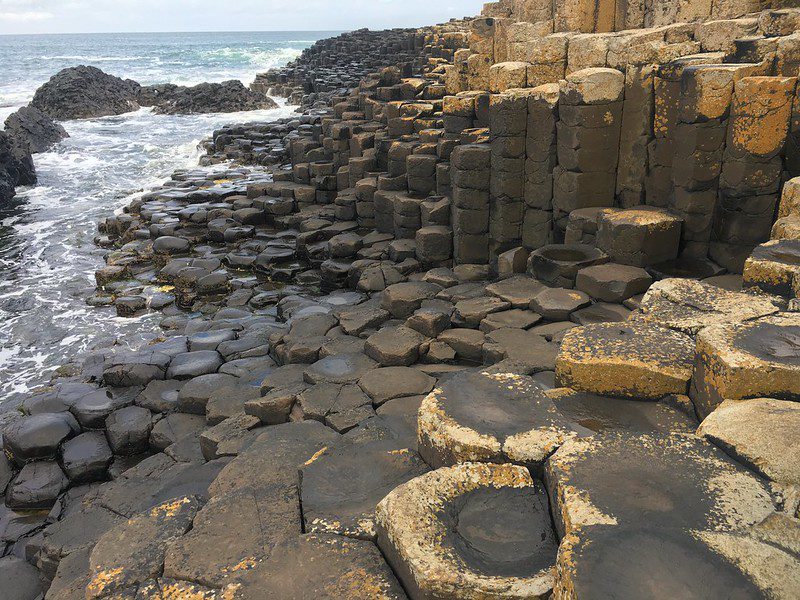 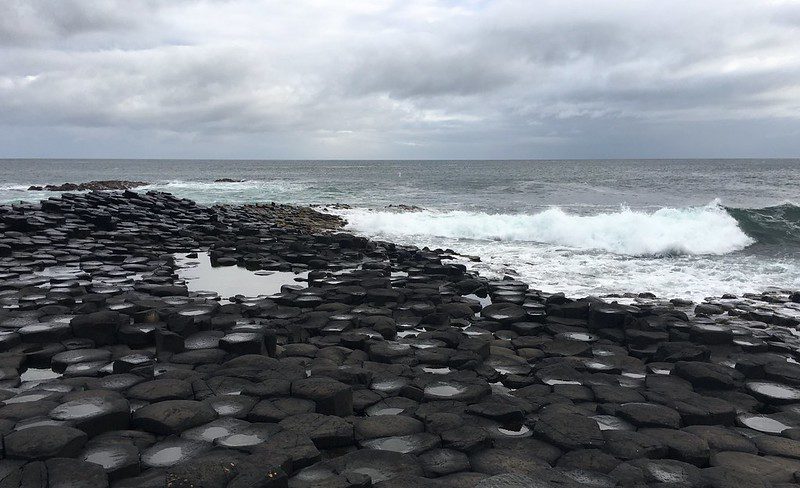 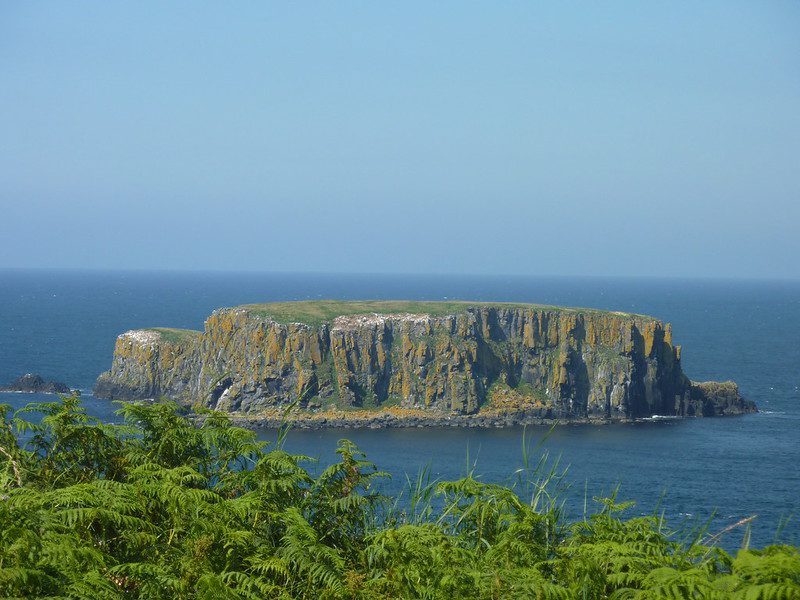 Northern Ireland Railways runs the Belfast-Derry railway line, which connects to Coleraine. It also runs along the Coleraine–Portrush branch line to Portrush. Ulsterbus, a local bus company, provides connections to the stations.

A scenic 7-mile walk is possible from Portrush, along with Dunluce Castle and Bushmills Railway.