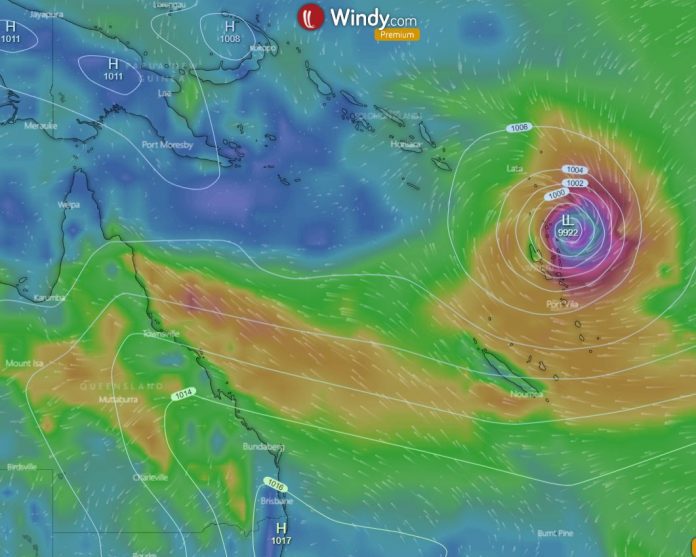 Around the middle of December, a possible cyclone or intense tropical disturbance may develop around Vanuatu and continue moving in a south-westerly track toward the southern Queensland coast.

At present, it doesn’t pose a risk as it is likely to veer toward the Queensland coast for a few days then take a southeasterly track into the well known “Cyclone Graveyard”(far southern coral sea and far northern Tasman Sea).

This area is where a few ex-tropical cyclones dissipate or die after they wreak havoc in the warmer tropical and subtropical seas to the north(Coral Sea).

Read about the rain event coming to coastal Queensland in this Queensland weather forecast.

Tropical storms & cyclones are a real threat during any cyclone or wet season and shouldn’t be taken lightly. Cyclone Tracey and Cyclone Yasi were 2 of the most destructive cyclones to ever strike the Australian mainland.

They both cause extensive damage and banana crops were especially devastated during Cyclone Yasi in 2011. Cyclone Tracey caused severe loss of life and also catastrophic structural damage to Darwin in 1974. Darwin basically had to be rebuilt.

The current tropical disturbance in the North-Western Coral sea has not formed as yet, and these predictions are based on weather maps and weather data.

La Nina is a moderate to strong weather system this year and will play a big role in the intensity and how many cyclones form this season. Currently, there are a predicted 4-6 cyclones that will form in the Coral sae or eastern half of Australia, and 2-3 may strike the Queensland coast or directly affect it with storm surges, gale-force winds, and driving onshore rains.

Cyclones can rapidly develop along the monsoon trough during the northern Australian wet season from converging winds that start to rotate and develop masses of convective activity which leads to destructive winds, storm surges, torrential rainfall, and exceptionally high tides.

When a westerly trade wind pulses along the equator and comes toward Australia we tend to see more significant rainfall and more tropical storms. This westerly surge is thought to be associated with the Madden–Julian oscillation.